Public mikvahs cannot be only for Orthodox

Previous Next
Public mikvahs cannot be only for Orthodox 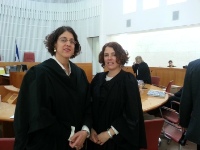 On February 26, 2014 the Supreme Court ruled to give the State 90 days to find a suitable solution for non-Orthodox converts requiring ritual immersion in public Mikvahs (ritual baths) to complete their conversion process. The petition was filed by the Reform and Conservative movements after non-orthodox rabbis and their converts were barred entry to public Mikvahs in Beersheba.

The petitioners’ lawyer, Orly Erez Likhovski of IRAC (pictured here on the left) said “These Mikvahs are operated by religious councils, and funded with public funds, making them public places, which should be open to all without discrimination. As long as the government has not banned non-Orthodox conversions, it must provide equal treatment for conversions carried out within the framework of the non-Orthodox movements, including allowing immersion of non-Orthodox converts in public Mikvahs.”