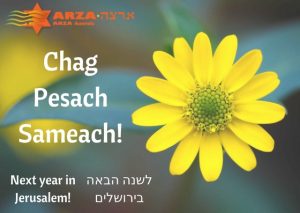 The coming few weeks are an emotional roller coaster for all Jews.  This weekend we celebrate Pesach and the exodus from Egypt, and soon after, on Yom HaShoah, we remember the six million people who were murdered simply because they were Jewish. We then commemorate Yom HaZicharon, when we remember those fallen soldiers who fought to protect Israel and who made it possible, with so many others, for us to celebrate Israel’s independence on April 19.

As we approach this momentous time, let us remember that the times of our greatest achievements  – including the creation of the State of Israel 70 years ago – have been when we put aside our political and denominational differences and united for the overall good of the Jewish People.  Let us hope that this “season of our Freedom” will start a new era of unity, something that ARZA Australia is committed to.

On behalf of the Executive Committee of ARZA I wish you, and those you love, a happy and healthy Pesach and hope that you will join us over the coming weeks in recalling the losses and celebrating the achievements,

THE SUBJECT OF Jewish pluralism in Israel has long been like a recurring pain. It hurts often enough to trouble you but getting it properly fixed would not only be cumbersome but excessively costly.

But as the modern state of Israel approaches it 70th birthday, for all its achievements it’s hard to ignore that ache any longer. One of the few subjects to unite the political left and right, the monopoly of the ultra-Orthodox rabbinate over religious and Jewish life and law in Israel has been simmering ominously. Now it seems to be finally coming up to the surface.

Last year’s dual decision by the Netanyahu Government to shelve an agreement over a new egalitarian prayer space at the Western Wall, and the advancement of a conversion bill which would further concentrate the ultra-Orthodox rabbinate’s control over who is a Jew, was met by almost universal condemnation from the global Jewish community.

The Australian Jewish community, strongly connected to Israel as it is, and generally far more reticent when it comes to criticism of Israel than the larger and less homogeneous US Jewish communities, took the unusual step of speaking out strongly against both announcements.

The Zionist Federation of Australia and its largest state affiliate roof body, Zionism Victoria, both joined Natan Sharansky’s Jewish Agency for Israel in criticising the moves. Sharansky, who had been working with Netanyahu to broker the Western Wall agreement, was understandably angered by it being unceremoniously dumped.

For years, the contentious issue of ultra-Orthodox Israelis being exempt from compulsory military service compounded by generous public funding for them to study at Yeshivot have been necessary compromises for any coalition government to survive in Israel’s system of unicameral legislature elected by proportional representation.

Save for one short-lived Coalition (2013-15) without the Haredi parties, these parties which make up around 10 percent of the Knesset stake their support for a government on controlling religious affairs in Israel, and inevitably get their way.

In recent weeks, the Netanyahu government has advanced a bill to avoid its coalition collapsing by moving to exempt Haredi yeshivah students from army service. This draft bill came only weeks after another controversial piece of legislation to force shops in Israel to close on Shabbat.

The Zionist dream is an imperfect reality so long as Israel prioritises the rights of a minority over a pluralistic approach that recognises all streams and practices of Judaism as legitimate.

At a time when Diaspora Jewry and Israel are struggling over a number of political issues, this spat between Israel and the global Jewish community, which even drew in the Jewish Agency, underlines the gravity of what is at stake.

It is the very essence of the Zionist dream – that is, the dream of a state that can be a home for all Jews around the world. The reality is that this dream is an imperfect reality so long as Israel prioritises the rights of a minority of Jews over a pluralistic approach that recognises all streams and practices of Judaism as legitimate.

Global Jewry is diverse. Around the world, including in Israel, the number of ways in which Jews identify is ever-increasing. Particularly for young people, the traditional streams of Orthodox, Progressive/Reform, Conservative and even Secular come nowhere near painting a true picture of where things are at.

The lack of recognition of conversions, marriages and other significant religious certifications by non-Orthodox Rabbis – and the lack even of basic civil marriage – are all serious failures of the modern state. But it is not only those who are not Orthodox who’ve been marginalised by Israel’s religious hegemony.

Last year’s revelation that the chief rabbi at one of Australia’s largest modern Orthodox synagogues (Rabbi Ralph Genende, from the Caulfield Hebrew Congregation) was put on a “blacklist” of sorts by the Israeli chief Rabbinate for having a conversion rejected showed that the standards of control are completely out of kilter with mainstream Judaism.

Of course, pluralism is difficult to achieve. Respect must be afforded to all levels of observance and tradition, to promote a cohesive society in which different groups can not only tolerate but respect each other. Indeed, an Israel which did not respect the religious traditions of Orthodox Judaism would be one which had lost sight of something fundamental to its identity. But the status quo is untenable.

Article by Dean SherrFor Israel to continue to hold itself up as the home of all Jews, it must act to break down the ultra-Orthodox control over Jewish religious affairs. It must act to open up its most significant and holy site to all Jews by establishing the new egalitarian space at the Kotel.

It must act to treat Orthodox, Reform, Conservative and Secular Jews (and all in between) equally under the law. It must act to ensure that it can be a place for Jews to keep Shabbat in a special and meaningful way, but also that everyday life can continue seven days a week for those who do not keep Shabbat.

And it must also act to ensure that the Jewish identity and ceremonies of those who are not Orthodox are both recognised and respected. Jewish pluralism is not something Israel can afford to put in the too-hard basket any longer. The Zionist dream depends on it.