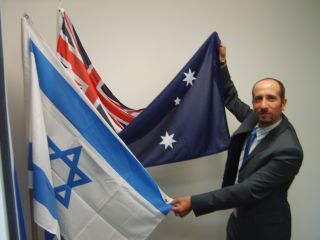 On January 1, eight years since the submission of a Supreme Court petition by Rabbi Miri Gold, the Reform movement received payment toward the salaries of four Reform rabbis. Rabbi Benjie Gruber of Kibbutz Yahel, who recently visited Australia as the guest of the UIA Progressive Trust, is one of the four rabbis.

Rabbi Gruber made Aliyah from the US at the age of five, with his parents and three siblings. He was raised in the spirit of Religious Zionism and was part of the year class that established the Hesder yeshiva in Yeruham. At the age of 20, he explains, “I made a switch and found myself in the Reform world.”

Usually people move in the other direction and become more extreme.
Benjie Gruber: “That’s true. But I felt that despite all the positive aspects of the world I had grown up in, it was missing some things that
are important to me: Issues such as human rights and equality for women and gay people. There is an inherent tension between the
religious world – in its various streams – and modernity. Some people solve this by going toward the Haredi extreme and others choose atheism. I chose to combine the two worlds. After all, that’s what Zionism originally sought to do – to combine Judaism and modernity. This is also what the Reform movement aims to do.”

What did you let go when you made this switch?

“One example is the concept of the ‘Chosen People.’ I don’t accept that – but I’m not claiming to represent the Reform movement, only myself.”

What does your job include?

“My rabbinical position is in Yahel. I also deal with everything a rabbi does – Bar Mitzvas, funerals, lessons, work in schools – in the Central Arava and in Hevel Eilot.”

Do Orthodox rabbis compete in this small market?

“There isn’t an official regional rabbi in Hevel Eilot, and I don’t have any interest or intention to interfere with the work of the Eilat city rabbi. Actually I don’t believe in religious wars, but in a free market of ideas and beliefs. I’m available to anyone who is interested in my religious and cultural services. I’m another option in a range of possibilities. I’m not complaining – I have plenty of work.”

Who paid your salary until January 1 this year?

“The Reform movement, which will continue to pay my salary, but from now on it will receive an allocation toward this cost, like all the Jewish streams. In principle I do not believe that the state should pay rabbis at all, but as long as it pays rabbis from other streams, it must pay us too. That’s what we were asking for: equality.”

Are you in favour of the separation of religion and state?

“I’m against separation in the American style. I prefer something closer to the European model, so that 20 years from now, anyone who wants to learn a page of Talmud will choose the version they want, instead of the state deciding for them.”

The Supreme Court decision is good news for Diaspora Jews.

“Definitely – I’m going to be visiting communities in Australia and Hong Kong soon on behalf of the Reform movement and I’ll be telling them the good news. It’s very important to prove that Israel promotes democracy and religious tolerance, and that there’s more than one way to be Jewish.”