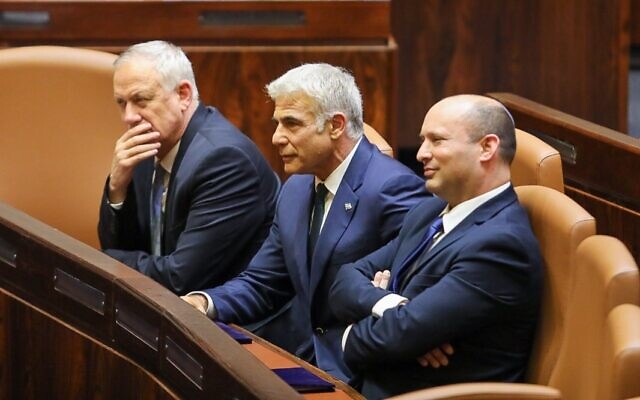 On Monday, June 20, Israeli Prime Minister Naftali Bennett announced he will be introducing a bill to dissolve the Knesset, (Israel’s parliament) and call new elections. If the bill is passed, a general election will be held in late October.

The bill was initially scheduled for a vote next Monday, but there are reports that it may be voted on as soon as Wednesday, June 22.

In his press conference on Monday night, Bennett explained his reasons for moving to dissolve the Government, saying “recently we have done everything to preserve this Government, we have turned over every stone… I decided to make the difficult and Zionist move… We managed to establish a good Government for Israel, we got Israel out of the pit.” This statement apparently referred to the political deadlock within Israel, which has had four inconclusive elections in the last three and a half years.

Bennett and his Government were in office only one year – they were sworn in on June 13, 2021. The Government is a parliamentary coalition consisting of eight different political parties which initially had a narrow majority of only 61 seats in Israel’s 120-seat Knesset. The coalition spanned the political spectrum and included, for the first time, an Arab Islamist party, the Ra’am party led by Mansour Abbas.

Foreign Minister Yair Lapid of the Yesh Atid party has been Bennett’s main political partner in the outgoing Government and will replace Bennett as interim PM until the election if the dissolution bill passes. This is because of a clause in the coalition agreement stating that in the event of Government collapse caused by the withdrawal of support from within one of the parties in Bennett’s “bloc”, as in this case, Lapid is to become interim PM.

Lapid will become the country’s fourteenth prime minister if the dissolution bill passes. He will remain in office as interim Prime Minister until a new government with a Knesset majority is formed.

This dissolution has followed weeks of political frustration within the Government, with numerous MKs threatening to quit. In late April, Idit Silman, a member of Bennett’s own right-wing Yamina party, quit the coalition and joined the opposition. This move left the Government with only 60 seats, equal to the opposition, resulting in an inability to pass legislation.

The political crisis reached a new height on June 6 when a vote in the Knesset failed to pass a bill renewing regulations that apply Israeli criminal and civil law to Israelis in the West Bank, giving Israeli settlers living there the same rights as citizens in Israel. These regulations need to be renewed every five years and were set to expire on June 30. However, if the Knesset is dissolved before then, the regulations will remain in place until the formation of a new Government.

A second defector from Bennett’s own Yamina party, MK Nir Orbach, cited the failure to pass the bill, and opposition to it from some members of the coalition, as a reason for jumping ship and leaving the Government with only 59 seats.

During his Monday night press conference, Bennett cited the inability to pass the bill as a reason for dissolving the Knesset now. He explained that he had held a series of talks on Friday with Israeli security and legal officials about the legal ramifications of the Government’s failure to extend the West Bank regulations. Bennett stated that he realised that allowing the expiration of the law meant the State of Israel would “enter into constitutional chaos… and he could not allow that.”

The collapse of the Government continues a state of effective political stalemate in Israel that has persisted since December 2018, when a majority Government led by Binyamin Netanyahu collapsed. There have been four elections since then, in April and September 2019, March 2020 and March 2021. Each of these elections ended in effective political deadlock, with little prospect of a stable majority Government. A key cause of that deadlock has been the corruption charges currently being prosecuted against long-serving former Prime Minister and current Opposition Leader Binyamin Netanyahu. These charges caused several potential coalition partners to refuse to serve with Netanyahu until the cases against him were resolved.

Despite its dissolution after only one year, the current Government can point to some significant political achievements, including passing a state budget in November for the first time in almost four years, lowering unemployment, being the first country to administer COVID-19 boosters, and, in foreign policy, a series of agreements and meetings expanding ties with the UAE, Morocco, Bahrain, Egypt and Jordan in the wake of the 2020 Abraham Accords.

US President Joe Biden plans to visit Israel before the next election would occur, probably in mid-July. Should the current Government dissolve, Lapid will be the Prime Minister, and thus meet with Biden instead of Bennett.

New Chairman of the Jewish Agency for Israel 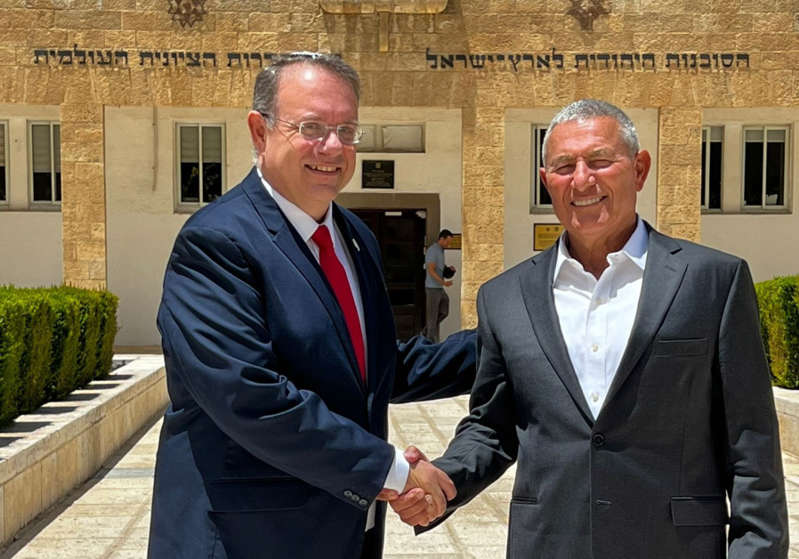 The Progressive/Reform Zionist Association of Australia (ARZA) is joined by the Union for Progressive Judaism (UPJ) and Netzer Australia, the Progressive Jewish and Reform Zionist youth movement in warmly welcoming former Major General Doron Almog as the new head of the Jewish Agency. He was nominated to this position on June 16, 2022.

He received the Israel Prize for his lifetime achievement and Special Contribution to Society and the State in 2016. The Israel Prize is regarded as the state’s highest honour. Aged 71, he was born in Rishon Le Tsiyon, Israel in 1951.

Doron Almog is known for his work as founder of a rehabilitation village for disabled children named in honour of his son Eran who died in 2007. Almog noted “in Eran’s name and the name of his friends who didn’t know what independence is, I ask that this ceremony be the beginning of a journey for Tikkun Olam (repairing the world), making Israeli society a more patient, more inclusive society. A small step toward a model society”.

Two days after his election he attended the IMPJ conference hosted by the Progressive/Reform movement of Israel and spoke about his eldest daughter who had made an Aliyah to Torah during her Bat Mitzvah at a Progressive Synagogue. He began his speech by saying “This is the first place I have chosen to be after I have been elected as chairman of the agency”.

Unfortunately, the Haredi movement has been publicly critical of his decision to attend the Progressive Movement’s annual convention in Israel. But their remarks were rebuffed by the Progressive Movement in Israel’s chair, Yair Lootstein who said they were reflective of a complete lack of understanding of the role of the Jewish Agency and the values of the State of Israel.

Yair Lootstein further said ”The Reform Movement will continue to work toward equality and freedom of religion in Israel and for strengthening the connection between the State of Israel and the liberal streams in the Diaspora”.

The Australian Progressive and Zionist Movement welcomes and strongly supports the strengthening of our connection with Israel and acceptance of all streams of Judaism in our Jewish Homeland. 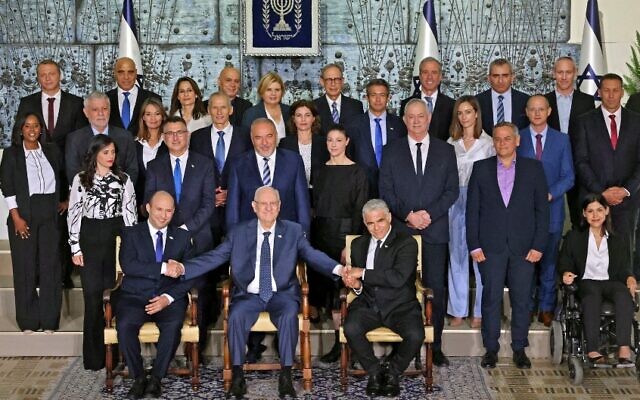 The Progressive/Reform Movement worldwide was very pleased to see a Coalition of diverse parties come together in Israel to form Government after years of the Netanyahu/Likud regime.

It has now become obvious that the Coalition is quite fragile. Mostly because some of its partners are throwing their weight around to get support for what they want, regardless of the outcome, even if it means losing control of government and the Knesset. Perhaps it is time for such individuals to put the country first, before their ambitions, and for the better good of the country they are supposed to be serving.

Australians know full well the effect of minor parties and cross bench independents in our Federal Senate and some of our States, where like Israel the system of voting is Proportional Representation.

Proportional Representation can deliver seats to individuals and minor parties based on a relatively small quota of votes/support to be elected. It massively increases the chances of minor parties and independents winning seats, making it very difficult for any major party to gain control of the house of government and in my opinion, makes it more difficult to provide political and economic stability.

I understand that Proportional Representation was chosen initially in Israel to be reflective of the diversity of groups within the Israeli community. I suggest that this may not currently be the case. Parties in Israel have shifted to groupings of left, right and moderate, as well as moderate left and moderate right. I hope this makes sense.

It appears impossible for any one party to win a majority in the Knesset to form government. This has led to the situation we are currently in today. It is reported that Naftali Bennett and Yair Lapid have been pleading for their political partners, just one year after their election to form government, not to give up.

Yair Lapid, Israel’s Foreign Minister and potentially its next Prime Minister said this week “This government is worth fighting for, and we will fight for it. It is the right thing for the State of Israel and the citizens of Israel. There is nothing easier than destroying; there is nothing more difficult than building”. Times of Israel