Israel must avoid another conversion crisis

Previous Next
Israel must avoid another conversion crisis 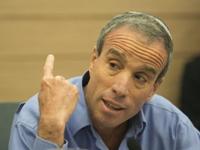 One of the central principles of the Passover Haggadah is “what begins with disgrace ends with praise.” Anyone knowledgeable in the history of the Knesset discussions of conversion will have observed that this concept is generally reversed, and that what began with good intentions ends in chaos and injury to the delicate relationship among the various Jewish denominations and between Diaspora Jewry and the State of Israel. We may shortly see a similar situation regarding MK Elazar Stern’s (pictured) conversion bill, which passed the first reading in the Knesset last week.

In theory, this legislation is superfluous, since these rabbis already work in this field. However, the Chief Rabbinate’s fear-mongering and the many embarrassing cases of

invalidated conversions have paralyzed these rabbis. Stern’s bill is meant to give these rabbis support in the hope that ultimately, their numbers will increase.

However, the bill faces serious opposition from Eli Ben Dahan, the deputy minister of religious services, and his Habayit Hayehudi partners, along with the Chief Rabbinate and ultra-Orthodox politicians.

The main goal of the bill’s opponents is to give the Chief Rabbinate full authority over all conversion matters, including the conversion of Israel Defense Forces soldiers. Surprisingly, representatives of the Justice Ministry and other government bodies have joined this front, strongly defending continued exclusivity for the Chief Rabbinate, despite its decades of proven failure.

If these opponents succeed in their efforts, the entire bill will be quashed. In theory, municipal rabbis will be able to establish conversion courts, but in practice nothing will change because of the impending repercussions from the consistently reclusive ultra- Orthodox Chief Rabbinate.

Another goal of the bill’s opponents is to make sure that only Orthodox conversions are recognized in Israel. Unlike in matters of marriage and divorce, the Orthodox monopoly on conversion has never actually been codified. For just this reason, the Supreme Court has consistently ruled in favor of recognition of Reform and Conservative conversions performed both in the Diaspora and in Israel.

The Supreme Court is due to discuss the matter further in a few months, but by then, Orthodox rabbis and people representing their interests will have done everything they can to pass a law granting the existing rabbinical establishment a monopoly on conversion. Due to the dangerous power of inertia, public officials are acting to consecrate and expand this Orthodox monopoly.

If they succeed in their efforts, despite the noteworthy objection of Stern (who is himself an Orthodox Jew), the Jewish world will once again fall into a tailspin of irritation and unnecessary battles. That would make this a sequel to the major crisis in relations between American Jews and Israel that followed a controversial proposal by Yisrael Beiteinu’s David Rotem that would grant the Chief Rabbinate sole authority over the conversion process in Israel.

It is worth pointing out that it was only Orthodox MKs who bothered to discuss the Stern bill. Their secular counterparts, like much of the Israeli public, have become weary of these battles within Orthodoxy. This situation can cause a dangerous dynamic of compromise. It cannot be Stern’s sole responsibility to defend the principle moderate forces in Israeli Orthodoxy must lead the conversion efforts or to express concern over another crisis in the Jewish world because of attacks on non-Orthodox denominations.

We cannot wait until the last minute, as we did with the Rotem bill. Although that proposal was ultimately defeated, the damage to Israel’s relationship with the Jewish

world has left a scar. Prime Minister Benjamin Netanyahu, Foreign Minister Avigdor Lieberman, Justice Minister Tzipi Livni and Religious Affairs Minister Naftali Bennett need to make it clear now that they will not allow another conversion crisis to arise. The heads of Jewish organizations such as the Jewish Agency and the Jewish Federations of North America must impress this message upon these Israeli leaders before the next committee discussions on the Stern bill.

Only if Israeli government officials and the international Jewish leadership take a clear, unambiguous stance on conversion will those who have been pulling the Jewish world into conversion crises over the past 30 years understand that this time, there has to be a different ending.

By Rabbi Gilad Kariv (OpEd printed in www.haaretz.com). Rabbi Kariv is the executive director of the Israel Movement for Reform and Progressive Judaism (Photo: Michal Fattal)