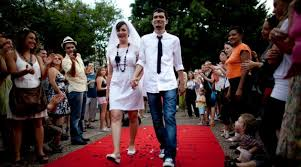 For most Israelis in the Jewish state, there is one legal way to get married – God’s way. At least two parties in the coalition government are promoting a bill to allow civil marriage in Israel, including for same-sex couples. One of them is Yesh Atid, which tapped into anti-religious sentiment in last January’s national election and finished in second place.

Israeli law empowers only Orthodox rabbis to officiate at Jewish weddings, but popular opposition is growing to this restriction and to what some Israelis see as an Orthodox stranglehold on the most precious moments of their lives.

Some of Israel’s most popular TV stars and models have come out this week in an advertisement supporting a new bill allowing civil marriage. A political storm is likely when it eventually comes up for a vote in parliament.

The Rabbinate, the Orthodox religious authority that issues marriage licenses in Israel, says it is charged with a task vital for the survival of the Jewish people, and a recent poll showed more Israelis oppose civil unions than support them.

Nevertheless, many Israelis want either a secular wedding or a religious marriage conducted by a non-Orthodox rabbi. Facebook pages have been popping up, with defiant couples calling on others to boycott the Rabbinate.

In September, Stav Sharon, a 30-year-old Pilates instructor, married her husband in an alternative ceremony performed in Israel by a non-Orthodox rabbi.

“We wanted a Jewish wedding despite being secular. We feel connected to our Judaism, even if we are not religious. It is our people, our tradition,” Sharon said.

Weddings such as Sharon’s fall into a legal no man’s land. They are not against the law, but neither are they recognized as valid by the Interior Ministry, which is responsible for registering marital status on the national identity card every Israeli is required to carry.

In a twist in the law, the ministry will register as married any Israeli couple that weds abroad – even in a non-religious ceremony – outside the purview of the Israeli rabbinate.

Some couples hop on the short flight to Cyprus to marry. The Czech Republic is another popular destination for Israelis wanting a civil wedding.

Sharon and her husband decided against that option. “Marrying abroad means giving in. We wanted to marry in our own country,” she said.

No formal records are kept on the officially invalid alternative ceremonies held in Israel. According to the Central Bureau of Statistics, nearly 39,000 Jewish couples married via the Rabbinate in 2011. About 9,000 couples registered that year as having married overseas.

Muslims, Druze and Christians in Israel are also required to marry through their own state-recognized religious authorities, making interfaith weddings possible only overseas.

Secular-religious tensions have simmered in Israel, which defines itself as a Jewish and democratic state, since its establishment in 1948.

About 20 percent of Israeli Jews describe themselves as Orthodox while the majority of citizens are only occasional synagogue-goers. There are also non-Orthodox communities such as Reform and Conservative, but these are proportionately smaller than in Jewish populations abroad.

Ultra-Orthodox zealots have drawn anger in recent years for separating men and women on some public buses and harassing women and girls for what they see as immodest dress. Orthodox rabbis insist that brides take ritual baths to purify themselves before marriage, a practice to which some Israeli women object.

Immigrants to Israel, which since its inception has appealed to Jews around the world to live in the Jewish state, can find marriage through its Rabbinate a grueling process.

Anyone wed by the Rabbinate is required to provide evidence of being Jewish, usually a simple and quick process.

But when it comes to new immigrants, the Rabbinate requires an affidavit, usually from an Orthodox rabbi in their home country, attesting they were born to a Jewish mother – the Orthodox criterion for determining if someone is a Jew.

And, Orthodox authorities in Israel can pile on more problems by digging even deeper into Jewish roots by requiring additional documentation proving that a bride or bridegroom’s grandmother was Jewish.

“It took a year,” said a 34-year-old Argentinian immigrant to Israel, who asked not to be identified.

“They said the papers I had were not sufficient. They kept asking for more and more crazy documents. At one point they wanted me to provide a witness, from Argentina, who knew my grandparents and who had seen them, inside their home, celebrating a Jewish holiday,” he said.

His case was ultimately brought before the Chief Rabbi who ruled the man was Jewish and could marry his bride-to-be.

Israel’s government is less strict in determining “who is a Jew” and therefore eligible to immigrate to Israel. Under its Law of Return, proof that someone has at least one Jewish grandparent is enough to receive automatic citizenship.

The Rabbinate says it is charged with preventing intermarriage and assimilation with non-Jewish communities which would endanger their people’s survive;.

Ziv Maor, the Rabbinate’s spokesman, said strict adherence to Orthodox ritual law and practices had bonded Jews across the globe and set common rules for all.

“A Moroccan Jew knew he could marry a Jewish woman from Lithuania,” he said. “Rabbinical law guides us in a very clear way on who is Jewish and who is not … and we do not have permission from past or future generations to stray even a hair’s breadth from those criteria,” Maor said.

According to the Rabbinate, only two percent of the men and women who apply to it for a marriage license are turned down because they are found not to be Jewish.

There are other groups to whom marriage is forbidden by rabbinical law.

Same-sex marriage, as in other religions, is out of the question as far as the Rabbinate is concerned. Israel’s Interior Ministry recognizes gay marriage – but only if it is conducted in a foreign country where it is legal.

Margot Madeson-Stern, a business consultant, was wed in Israel by a non-Orthodox rabbi at a celebration attended by more than 300 guests. The ceremony had no legal foundation in Israel.

“The (Rabbinate) would not marry me. The person I fell in love with was a woman,” said Madeson-Stern, 30. “I’m Jewish. I wanted a Jewish wedding. It’s my family, my tradition, it’s how I grew up.”

She later travelled with her wife to New York for another wedding ceremony. New York recognizes gay marriages, so Israel’s Interior Ministry did the same, registering them as a couple.

“It cannot be that people who do not believe or whose lifestyle does not suit the Rabbinate will be forced to get married by people whose way is not their own,” Yesh Atid head Yair Lapid told Israel Radio this month.

But tradition could die hard in Israel. A poll published in November in the Israeli newspaper, Maariv, showed that while 41 percent of Jewish Israelis supported Yesh Atid’s Civil Union bill, 47 percent objected.

Such bills have been floated at Israel’s parliament before. But for the first time in years, ultra-Orthodox parties, which oppose civil marriage, are not in the government.

Yesh Atid believes it has enough votes from lawmakers across the board to pass the law in the next few months. The Rabbinate says it will oppose the measure strongly.

“Matters of marriage, divorce and conversion are our most important fortress. It must not be touched and we will defend it fiercely,” said Maor.