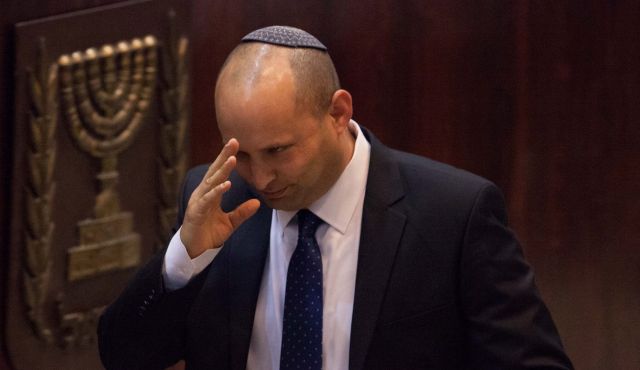 Religious Services Minister Naftali Bennett Sunday presented his reform to the marriage registration process by expanding catchment areas and canceling dozens of religious councils. Bennett and his deputy Eli Ben Dahan announced that they will be advancing the “Tzohar Law,” or an equivalent law which will cancel the regional division of marriage registration areas, which has been in use for decades. This step introduces competition between municipal rabbis and regional religious councils.

Marriage registration in Israel is carried out according to regional divisions. Couples can register to be married with a local religious council if at least one of them is a resident in the council’s area. The proposal to make marriage registration national was raised by former MKs Otniel Schneller ‏(Kadima‏) and Faina Kirshenbaum ‏(Yisrael Beiteinu‏) and MK Zeev Elkin ‏(Likud‏) following cases in which municipal rabbis and marriage registrars took it upon themselves to refuse to register converts to Judaism and also created various difficulties for those who are Jewish by birth.

The Tzohar Law was raised in the previous government’s term and even passed its first reading in the Knesset, but was dropped following pressure from Shas and the Sephardi Chief Rabbi Shlomo Amar. However, then-Religious Services Minister Yaakov Margi ‏(Shas‏) was forced to arrange a special status for the Tzohar organization of religious Zionist rabbis, so that it could register couples on non-regional basis and issue marriage certificates.

Ben Dahan now wants to revive the original proposal and introduce competition between rabbis from different municipalities and religious councils. “The aim is that from today onward everyone can register to be married everywhere,” Ben Dahan said. “This means that people will no longer be bound to a particular religious council, and that every religious council needs to make an effort to open its doors during non-office hours and to provide a better service.”

Ben Dahan’s office emphasized that there is no need to revive the legislative process of the Tzohar Law, and that the process will be a simple one.

Bennett and Ben Dahan also announced a reform in the number of religious councils − which will be reduced from 133 to 80 − as well as changes in the election methods for religious councils, which Bennett called “separation of politics from religion.”

This means that search committees or tenders will be used to select the heads of religious councils, instead of the current cumbersome selection process carried out by representatives of the religious services minister, local authorities and the local rabbinate.

It should be noted that the chairman of the Tzohar organization, Rabbi David Stav, is seeking an appointment as Ashkenazi Chief Rabbi.

The ITIM non-profit organization, which provides assistance for people who encounter difficulties in receiving religious services, also welcomed the reform. “The assumption that a rabbi in a city knows the city’s citizens personally and should therefore register the marriage is an archaic and incorrect one, which has led, in many cases, to disrespect and lack of [proper] service for the public,” a spokesperson for the organization said.

The executive director of the Israel Movement for Reform and Progressive Judaism, Rabbi Gilad Kariv, called the reform a “cosmetic face lift,” and said that “the only revolution that could cure the crisis in religious services in Israel is canceling the Orthodox monopoly and providing real choice to the Jewish public in Israel between different congregations, groups and streams of Judaism.”

Attorney Yizhar Hess, CEO of the Masorti Movement, said that “the monopoly threatens the unity of the nation, distancing Jews from marrying in accordance with Jewish law … The Orthodox monopoly is immoral even when it is immersed in the rhetoric of love for Israel.”

MK Aliza Lavie ‏(Yesh Atid‏) said: “This is the first sign that heralds the beginning of a comprehensive and necessary change in the religious services system in Israel, and I hope that these are not empty words and that soon we will feel the change on the ground. We need to continue to address many other matters such as conversion, [religious] courts, kashrut and more.”

The Ne’emanei Torah Va’Avodah religious Zionist group also welcomed the reform, explaining that it would “directly open the marriage market up to competition, and to a solution to the problems of the converts.”

However, it opposes the idea that the heads of the religious councils should be chosen by the minister instead of appointed publicly, even if this is done by a search committee or tender. “This is unacceptable centralization and it would strengthen the monopoly of religious services in Israel,” the group says.

MK Moshe Gafni ‏(United Torah Judaism‏) criticized the plans and said that “the sensitive issue of marriage and divorce is no less important than that of an identity card, passport or any other change in the personal status of the citizen who must come [to deal with these matters] to his place of residence.

“Bennett’s step, just days after he voted in the government for a moral and disproportionate blow to the budgets of the Torah institutions − including those he represents − will harm service to the citizens.”