Bennet deputy permits use of ritual baths by all Jews, then recants

Previous Next
Bennet deputy permits use of ritual baths by all Jews, then recants

Praise for Deputy Minister for Religious Affairs Eli Ben-Dahan by Reform and Conservative movements turns into condemnation after he clarifies that non-Orthodox Jews cannot use state-sponsored mikvehs for purpose of conversion. 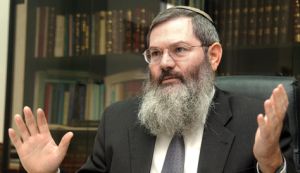 Earlier praise for Deputy Minister for Religious Affairs Eli Ben-Dahan by non-Orthodox circles in Israel has rapidly shifted to condemnation, following his partial retraction of an earlier statement that he would permit immersion in state-sponsored mikvehs (Jewish ritual baths) by Jews of all denominations.

Ben-Dahan’s announcement had implied that this would include immersion for the purpose of conversion, even though Reform and Conservative conversions are not recognized by the Ministry of Interior (which handles civil registration), particularly when it comes to the licensing of marriages.

It all started when Ben-Dahan announced that the network of mikvehs run by local religious councils would permit immersion by Jews belonging to non-Orthodox. “Every Jew, from any stream, including the Reform and Conservative ones, will be able to immerse in a mikveh, even for the purpose of conversion.” His words came in response to a question by attorney Yizhar Hess, executive director and CEO of the Masorti (Conservative) Movement in Israel.

Following this statement, the spokeswoman for the Ministry for Religious Affairs and the Conservative Movement came out with a joint statement to the media, a rare event. According to Ben-Dahan, he is “striving to foster competition in the delivery of religious services with the purpose of making them more efficient and user-friendly, for the benefit of all citizens. Religious services are there for all of Israel’s Jewish citizens, and everyone should be able to utilize them. I would like to emphasize that these services are given in accordance with Jewish law.”

Hess congratulated Ben Dahan, saying “this constitutes a real change. We would be happy to see these instructions implemented as quickly as possible.” The Reform Movement and the non-profit organization Hiddush, which advocates for religious freedom and equality, congratulated Ben-Dahan.

Following the publication of his statement, Ben-Dahan said that he has no intention of changing the Ministry’s policies. “The mikvehs are public buildings, open to anyone wishing to immerse himself. This has been the policy all along. The mikvehs operate according to the law governing religious services, and will continue to function according to Jewish law”.

Hess, who had earlier congratulated Ben-Dahan, said that it was “sad and disgraceful that the deputy minister took fright at his own statements to the Knesset Committee, and is now retracting his promise to allow immersion of Conservative and Reform converts. There were dozens of people at the committee meeting, including his own staff, who witnessed our dialogue, in which he promised that there would be no problem with usage of the baths by any sector and for any purpose.”

Hess added that “committee chairman, MK Miri Regev, praised him, justifiably so, for these words. I publicly praised him for his words which reflected, I thought, a new spirit prevailing in the Ministry for Religious Affairs. He acknowledged my congratulations. The Ministry spokeswoman even formulated with us the announcement to the media. However, within a matter of hours he retracted his statement. He became afraid and did not have the courage to admit he had made a mistake, as expected of a leader, or of a rabbi distancing himself from untruths. Instead he denied making the statements, as if there had been no witnesses.”

Hess added that “Ben-Dahan exposed the naked truth, which is that the Ministry really serves only one type of religious Jews. This is an anachronistic relic which keeps the Ministry as the most sectorial branch of government in Israel. All of its budget goes to Orthodox Jews, in all their diversity, to the exclusion and blatant discrimination of and with an overt arrogance towards any other Jewish stream that is different.”

Hess, reconsidering his condemnation, added: “If the deputy minister of religious affairs did in fact retract the denial of what he said, I again congratulate him. I hope this was his last flip-flop in this embarrassing affair and that he will live up to his commitment to allow Reform and Conservative converts to immerse themselves in mikvehs throughout Israel as part of completing their conversion process.”

By Yair Ettinger – printed in Ha’Aretz