As reported by the Israel Religious Action Centre “in response to the controversial Belarusian election results made public on August 18, tens of thousands of Belarusians took to the streets demanding an end to President Lukashenko’s long and anti -democratic reign. The protesters met with Government violence. Among the protesters were members of the Reform/Progressive congregation in Minsk, some of whom were arrested”.

A webinar has been made where we hear from Rabbi Grisha Abramovitch, from Minsk about the protests, the situation in Belarus, his congregation, and how we can act to support the protesters, working to advance democracy in Belarus.

Rabbi Sergio Bergman, the new President of the World Union for Progressive Judaism also speaks on this webinar.

In the meantime I bring to your attention a wonderful ZFA Lockdown Learning interview session with Anat Hoffman, Executive Director of the Israel Religious Action Centre discussing Women of the Wall and the many other legal cases brought to the Israeli Supreme Court in support of equality and the rights of Progressive Jews. 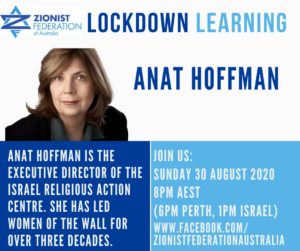