This article was originally published by the Australian online site, Plus61j.net.au. 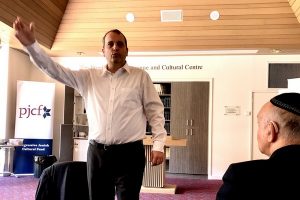 WHEN AUSTRALIAN JEWS meet the incoming Israeli ambassador, the first question to ask him should be about the future of religious pluralism in Israel, ahead of Iran and negotiations with the Palestinians, according to Rabbi Gilad Kariv, executive director of the Israel Movement for Progressive Judaism.

“Whenever there is a challenging headline about the Kotel, ring the Israeli embassy in Canberra. You may think ‘who cares?’, but trust me, when you call them, shouting at them, they will report this interaction back to Jerusalem,” Rabbi Kariv added in an address to Temple Beth Israel in Melbourne over the weekend.

When people call the embassy, he said they should “act like Israelis” and “forget your Australian manners”, which produced much laughter among the 100 congregants attending his outspoken Shabbat drasha.

Rabbi Kariv told the audience that in less than a decade, Israel will be home to more Jews than the rest of the world combined. When this happens official Israeli norms and government policy will influence the fate of global Jewry much more than now, on many matters, such as marriage, conversion and the status of women, he explained.

While he acknowledged global disappointment over the Netanyahu government’s decision in June to reverse a commitment to create a mixed prayer section at the southern end of the Western Wall, Rabbi Kariv urged Progressive Jews not to despair, as he saw a kernel of hope in the debacle.

“We must not forget that this was the first time we succeeded to reach a compromise with the ultra-Orthodox,” a moment that demonstrated that opposing sides could “reach understandings when each side is willing to take small steps to turn controversies into historical agreements.”

In less than a decade, Israel will be home to more Jews than the rest of the world combined. The Kotel and religious pluralism were among a raft of issues that demonstrated the need for a strong and vibrant Progressive movement, in Israel and the diaspora, to enable Israel to fulfil the Zionist aspirations of its founding fathers and mothers, Rabbi Kariv added, as he reflected on Israel’s Declaration of Independence and its noble call that the State should be “based on freedom, justice and peace as envisaged by the prophets of Israel; ensuring complete equality of social and political rights to all its inhabitants irrespective of religion, race or sex.”

Seventy years later, Rabbi Kariv explained that “without a strong and vibrant presence of Progressive Judaism in Medinat Yisrael, it will be very difficult for the citizens of Israel to make sure we secure this noble Zionist aim.” He described that at present, thousands of Israeli families find themselves detached from their Jewish heritage, due to the reality that in many communities there is only one way of celebrating Jewish life.

Reflecting on the week’s parsha, Rabbi Kariv drew inspiration from Avraham who realised that in order to root himself in the land, he needed to dig wells and plant trees. For progressive Jews, this means that in order to thrive, they need to do more to fight and win the big battles of religious pluralism around the Kotel and conversion.

“Our future in Eretz Yisrael will be determined by our ability to dig wells and plant trees, to establish new congregations, open new pre-schools, new youth activities … to make sure we can be found in every student campus around the country, to do social justice communal projects, to do the things that you are doing here in Melbourne, in Medinat Yisrael, in order to meet our potential.”