Divorcing the Diaspora: How Netanyahu Is Finally Writing Off U.S. Jews

The Israeli government’s decision to suspend the Western Wall compromise is part of the growing evidence, observers say, that something fundamental has changed in the relationship

Until not long ago, Jewish Agency Chairman Natan Sharansky was the go-to guy for anyone seeking assurance that Israel did, indeed, value its relationship with American Jews.

Every time it seemed the “Western Wall deal” – that promise to provide Reform and Conservative Jews with an egalitarian place of their own for prayer at the Jewish holy site – was off, Sharansky could be counted on to argue otherwise. I know Prime Minister Benjamin well, he would tell the skeptics, and no other Israeli leader understands, as he does, the strategic importance of the American Jewish community for Israel.

The former Soviet dissident is singing a different tune nowadays. That became profoundly evident during a special Knesset session held last week on the Western Wall controversy, attended by a delegation of world Jewish leaders.

Noting that the Israeli government had shown no inclination whatsoever to mend the growing rift with American Jewry since the deal was officially suspended more than four months ago, Sharansky warned the participants: “It is inevitable that the crisis will continue.”  Coming from the last of the true believers, his words reverberated loudly.

In a sense, Sharansky was echoing what many observers of Israel-Diaspora relations have been saying, both out loud and behind closed doors, in recent months: that Israel has concluded it no longer needs American Jews. Or at least two-thirds of them, as Dan Shapiro, the former U.S. ambassador to Israel, pointed out recently, referring to the majority who vote Democrat, hold progressive views and tend to identify as Reform or Conservative Jews.

As Shapiro warned at a recent conference sponsored by the Anti-Defamation League: “There is an idea that has some currency in certain circles around the Israeli government that says, ‘You know what, we can write off that segment of American Jewry because in a couple of generations their children or grandchildren will assimilate. So let’s focus on the Orthodox who are an important constituency but smaller. Let’s focus on Evangelicals, and we can sustain our support from the American public by focusing on those populations and writing off and being dismissive of Jewish progressives.’”

The evidence supporting this theory has been piling up, the most obvious example being the Israeli government’s suspension of the Western Wall deal. Following three-and-a-half years of negotiations, in January 2016 the government approved the plan to expand and upgrade the temporary egalitarian prayer platform located at the southern side of the Western Wall.

The plan stipulated that the new and improved space would be visible to all visitors entering the holy site, and would share an entryway with the existing, gender-segregated prayer platforms on the northern side of the Western Wall. It also envisioned the creation of a new public authority that would administer the egalitarian prayer area, which would include representatives of the Conservative and Reform movements.

When the plan was approved, it was hailed as “historic” – the first time the Israeli government had ever provided official recognition to the non-Orthodox movements at the Western Wall. For close to a year and a half, though, the government refrained from implementing the plan, and in late June, under pressure from his ultra-Orthodox coalition partners, Prime Minister Benjamin Netanyahu pushed through a vote to have it officially “frozen.”

As if that weren’t a big enough affront, the Israeli government voted on the very same day to advance legislation that would deny recognition of any conversions performed in Israel outside the state-sanctioned Orthodox system. In other words, Jews of choice converted by Conservative and Reform rabbis – and in some cases, even by Orthodox-ordained ones – would not be eligible for Israeli citizenship. This decision clearly did not take into consideration the fact that the overwhelming majority of affiliated Jews in the United States belong to the Reform and Conservative movements.

Diaspora Jews – particularly those in America – received another jolt just a few weeks later, when news broke that Israel maintains a blacklist of overseas rabbis. The list, compiled by the Chief Rabbinate, contained the names of 160 rabbis, most of them American, whose letters certifying the Jewishness of candidates for marriage in Israel have been rejected.

Topping all this off are the constant insults and barbs being hurled at Reform and Conservative Jews by well-known Orthodox rabbis in Israel, not to mention members of Netanyahu’s own Likud party. More often than not, the prime minister has let them get away with this name-calling.

If Israel is, indeed, experiencing a change of heart about American Jews, the signs were already evident a few years back. Many observers trace the shift to March 2015 when Netanyahu delivered his famous speech before the U.S. Congress against the Iranian nuclear deal, which was about to be finalized. Considering that 70 percent of American Jews had voted for Barack Obama, Netanyahu’s efforts to lead a revolt against him were seen by many in the Jewish community as unconscionable.

The election of Donald Trump, with whom Netanyahu is on much better terms, has naturally emboldened those who believe Israel owes nothing to American Jews and can make do without them.

With Netanyahu enjoying a direct line to the White House these days, there is much less dependency on the Jewish lobby in America. That is especially true considering the unconditional support he enjoys from Christian Evangelicals, a key base for the Trump administration. Indeed, on controversial issues like settlement expansion, Israel’s right-wing government gets much more support from Christian Evangelicals than it does from the largely progressive Jewish community in America.

Michael Oren, the former Israeli ambassador to the United States and now a Knesset member from the center-right Kulanu party, believes it would be a strategic mistake for Israel to write off American Jews. Yet at the same time, if growing numbers of Israelis view American Jews as a “lost cause,” he says, American Jews are also partly to blame.

“We went to American Jews and told them that the Iran deal endangers 6 million Jews in Israel, and that it’s not an American political issue, but rather, a matter of Jewish existence,” he recounts, “and I don’t need to tell you what happened.”

Nachman Shai, a member of the opposition Zionist Union, also considers the Iran nuclear deal a key turning point, but for different reasons than Oren. “For Bibi (Netanyahu) to come out like that against a Democratic president who enjoyed such huge support among American Jews was like a smack on the head for them,” he says.

Netanyahu will never declare out loud that he has written off American Jews, according to Shai, but his behavior seems to indicate otherwise. “Whether it’s the Iran deal or his lack of response to anti-Semitism in the United States, it’s clear that his top priority these days is to get Trump to reevaluate the Iran deal, so he doesn’t want to antagonize anyone in the administration,” says the lawmaker. “Everything Bibi does is motivated by what he believes to be in Israel’s best interests, which is not necessarily the best interests of the Jewish people.”

Leaders of the non-Orthodox movements agree that the signs are all there.

“What I can say is that the actions the government has been taking suggest very loudly and clearly to Jews in North America that we don’t matter and that we can be disrespected and delegitimized without serious consequence to strategic issues, whether it be security or some of the other many challenges Israel faces, and I think that’s incontrovertible,” says Rabbi Rick Jacobs, president of the Union for Reform Judaism.

“Non-Orthodox Jews see this prime minister and his current decisions as either not finding our cause compelling or making a calculation that says, ‘You know what, we have enough support from other areas. It won’t be a disaster if we lose the overwhelming majority of American Jews.’”

“Sure, we’re facing huge challenges like assimilation, acculturation and intermarriage,” he notes, “but at the same time, you’ve got 6 million Jews here, 94 percent of whom are proud to be Jewish and 4 million of whom are affiliated with a religious institution. To think that two-thirds of American Jews are going to disappear in the next 10 years is ridiculous. But astonishingly, many Israeli leaders seem to believe that to be the case and that somehow or other Israel’s strategic concerns can be carried by a very small Orthodox population, along with Evangelicals.”

The Ruderman Family Foundation has taken up the challenge in recent years of educating Israelis about the Jewish American community, often through delegation visits to the United States. That is why founder Jay Ruderman finds recent actions of the Israeli government especially frustrating.

“The current Israeli administration seems to be in the completely untenable situation of choosing between continuing to build strong ties to the American Jewish community or ensuring its political survival,” he notes, “and survival seems to be winning.”

The best proof, Ruderman continues, is its about-face on the Western Wall deal. “This backtracking may ensure the Israeli government’s political survival but threatens the vital relationship Israel has with American Jews,” he warns.

In July 2010, when Israel was considering yet another controversial conversion law, a group of Jewish American senators drafted a protest letter, warning that if passed, the legislation would harm the bilateral strategic relationship between the United States and Israel. “And guess what? The bill suddenly disappeared,” recalls Oren. “Compare that to what happened a couple of months ago when a group of Jewish senators sent a letter protesting the suspension of the Western Wall deal and the latest conversion law. It hardly made the news. And that, to me, is the entire story in a nutshell.” 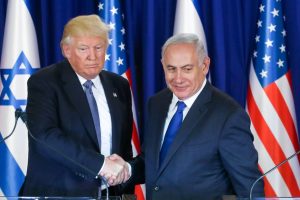 President Trump and Prime Minister Netanyahu, during the president’s visit in Israel, May 22, 2017.

A demonstrator holding a sign during a protest against the policies of U.S. President Donald Trump and Prime Minister Benjamin Netanyahu at Grand Central Terminal in New York City, February 15, 2017.  MIKE SEGAR/REUTERS

Not all Orthodox Jews in America are happy with what’s going on either. At a recent Knesset session that addressed the growing rift between Israel and American Jewry, Jerry Silverman, president of the Jewish Federations of North America and an Orthodox Jew himself, gave voice to their concerns about the Western Wall deal. “What many Orthodox rabbis have said to me is, ‘Listen, we may not have been in agreement about the solution, but once there’s an agreement, and once it’s signed off, it should be implemented,’” he said.

Rabbi Ari Berman, the recently appointed president of Yeshiva University and a prominent figure in the Modern Orthodox world, stopped short of criticizing the Israeli government but suggested it could benefit by investing more in its relations with American Jewry.

“It is critical for Israel to consider the fate and fortunes of all Jews, whether in Israel or the Diaspora, no matter their ideological proclivities,” he wrote in an email. “At the most basic level, this is a matter of utility. Jews both in Israel and the Diaspora need each other’s support. But in a more profound sense, the very nature of the State of Israel is that it aspires to serve as a home for all Jews and as such must factor in the concerns of the broader Jewish populace in its decision-making.”

Avinoam Bar-Yosef, president of the Jerusalem-based Jewish People Policy Institute, is still willing to give Netanyahu the benefit of the doubt. To be sure, he says, there are factions in the government, specifically the ultra-Orthodox, who would be delighted to issue a metaphorical writ of divorce to large segments of American Jewry. “But I really don’t think this is the position of the prime minister,” he insists. “If anything, my impression is that he is much more interested than any of his predecessors in Diaspora Jews.”