Previous Next
Women of the Wall ‘ecstatic’ over Court win 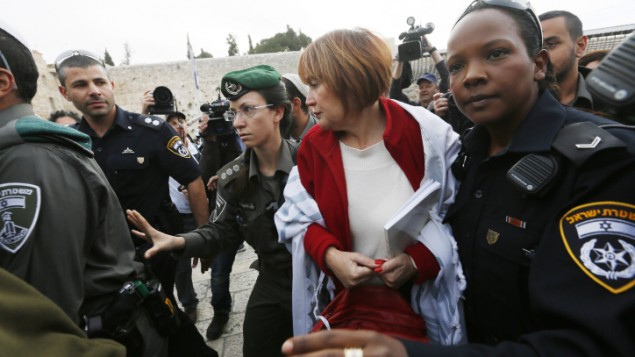 A Jerusalem court had ruled that police were wrong to arrest five members of the group, in a decision that could alter the status quo at the holy site.

Women of the Wall director Lesley Sachs is detained by police for wearing a prayer shawl at the Western Wall on April 11 (photo credit: Miriam Alster/Flash90)

A court handed the Women of the Wall a significant legal victory in a decision released Thursday, ruling that the state cannot arrest the women for their activities at the holy site.

If not reversed by a higher court, the decision could mark a shift in the status quo at the Western Wall and a turning point in the liberal group’s fight to pray there as it wishes.

The decision, written by Judge Moshe Sobel of the Jerusalem District Court, was a defeat for the state prosecutor and the police, who arrested five of the women on April 11 and charged them with disturbing the peace.

A lower court judge ruled later the same day that there was no legal basis for the arrests and freed all five. Police appealed Wednesday to the Jerusalem District Court in an attempt to overturn the ruling, but instead Sobel upheld it — a decision that could force a revision of policy at the Western Wall.

Police say the women, who pray at the wall once a month and are fighting for acceptance of liberal Jewish custom there, are violating a 2003 Supreme Court decision barring them from wearing prayer shawls and reading from the Torah because those actions deviate from the Orthodox “tradition of the site,” upset other worshipers and cause disturbances.

The new ruling, however, said that Supreme Court decision “cannot be considered a legal order directed at the defendants and violated by them,” and thus was not enough to warrant their arrest.

‘The fear of creating disturbances, without a claim that any of the defendants used any kind of violence, physical or verbal, does not constitute a reasonable basis for the fear that the defendants are those who threaten public security or the security of any person in the Western Wall plaza’

In addition, he wrote, the idea of the “tradition of the site” can be interpreted more broadly, in terms that are “pluralistic-secular-nationalist” rather than purely Orthodox. There is thus no “reasonable suspicion” that the women violated laws governing holy sites, he wrote.

Lastly, Sobel ruled that the police’s fear that the women’s actions could spark disturbances by others did not mean they could be arrested.

“The fear of creating such disturbances, without a claim that any of the defendants used any kind of violence, physical or verbal, does not constitute a reasonable basis for the fear that the defendants are those who threaten public security or the security of any person in the Western Wall plaza,” he wrote.

Bonna Devora Haberman, one of the founders of the Women of the Wall, said the ruling marked a “tremendous celebration for the Jewish people.”

“I don’t want to exaggerate, but the feeling is ecstatic,” she said. “It’s so meaningful for the state of Israel that our court upheld what is so basic but has been a struggle for 25 years.”

“We now can confirm that Jewish women are fully free to practice according to our particular observances in the most public sacred space of the Jewish people,” she said.

Shmuel Rabinowitz, the government-appointed rabbi in charge of the Western Wall, said he would be requesting clarifications from the Attorney General, and called on “all sides” to behave responsibly and prevent “extremists from all sides from turning the Western Wall into a place of battle between brothers.”

In a second statement, released in English, Rabinowitz expressed “disgust” for what he called “provocations” on the part of the Women of the Wall. “I will fight wholeheartedly against any harm to the holiness of the Western Wall, and I will not allow the slightest deviation from what is and has been customary at the site for decades,” the statement said.

Rabinowitz recently told Orthodox rabbis during a visit to North America that attempts to “divide the prayer plaza or delineate hours will face strong opposition and bring about a civil war,” according to the statement.

No comment from police was immediately available. A spokesperson for  the Justice Ministry said it was too early to comment on the possibility of an appeal by the state prosecutor to the Supreme Court.

The ruling comes as Jewish Agency Chairman Natan Sharansky attempts to engineer a compromise that would see a pluralistic prayer area set up nearby.

“The decision of the District Court and the reactions to it only strengthen the need for a sustainable, agreed solution, which will allow every Jew to feel at home at the Western Wall, as the basis for any resolution,” Sharansky said Thursday in response to the ruling.

He said the sides should still work toward implementing his proposal.