Women of the Wall celebrates 25 years

Previous Next
Women of the Wall celebrates 25 years 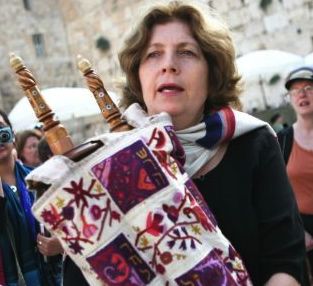 Anat Hoffman writes about the historic 25th anniversary of Women of the Wall on 4 November 2013.

Today I prayed at the Western Wall alongside nearly 1,000 women and I was engulfed by the voices of women singing together and men supporting us with both their presence and their prayers. We outnumbered our detractors by a large margin, and we were able to finish our services in peace. I also thought about the thousands of our supporters around the world joining us in their own solidarity services, and that made today’s milestone even sweeter.

Today was more than just the 25th anniversary of Women of the Wall. We are no longer spectators in shaping policy for the holy site. I am very hopeful that the future of the Western Wall Complex is one where pluralism will be the norm. The place where all Jews turn when they pray will no longer reflect the values of one small minority view. We are working to create an equal place at the Western Wall for all Jewish streams. The strong turnout today at the Kotel and at solidarity rallies emphasizes how ready the Jewish world is for this change.

Over the next two weeks, Jewish professionals and lay leaders are converging on Jerusalem for the Jewish Federation of North America’s General Assembly. The theme for the conference is The Global Jewish Shuk: A Marketplace of Dialogue and Debate. I will be speaking on a panel about religious pluralism in Israel, and many of the other sessions will be dealing with IRAC’s core issues.

Our success at the Wall, desegregating buses and other public spaces, and fighting racist incitement has changed the direction of the debate in Israel, and we will see that in this year’s General Assembly. Together we are holding Israel to the highest standards. I want to thank all the women (and men) who came out to the Kotel today, and to everyone else supporting us from afar. Our combined efforts are helping pluralism thrive in Israel.