The New Israeli Government So Far

Previous Next
The New Israeli Government So Far 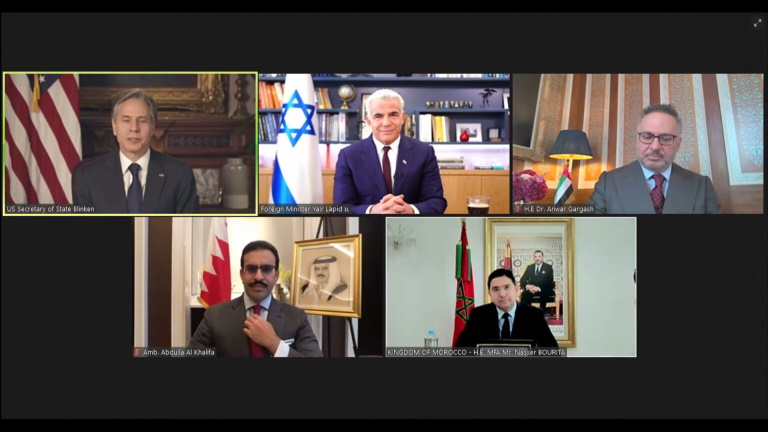 U.S. Secretary of State Antony Blinken marks the anniversary of the Abraham Accords with, clockwise, diplomats from Israel, the United Arab Emirates, Morocco and Bahrain, on Sept. 17, 2021. (Screenshot)

With the High Holydays having drawn to an end and a New Year dawning, it may well be time to cast our minds back over the last months to examine what has occurred since the change in government in Israel.

The Bennett/Lapid National Unity Government with a Coalition of the left and the right was certainly seen as a surprise. However, it was a welcome one, and came with the hope of changing the political discourse and bringing about a more pluralistic society in Israel.

Foreign Minister, Yair Lapid recently wrote an interesting article where he drew attention to the change in Israel’s foreign policy under the new government. He wrote “The only alliances Israel could rely on (under Netanyahu) were based on economic or security interests; there was no place for dialogue based on shared values or friendship between peoples”.

Foreign policy was one of pessimistic suspicion with claims that “they’re all antisemitic and there’s no point”. He blamed this for the rise in antisemitism and sympathy for Israel among younger Americans and Democrat voters falling to an all-time low.

He spoke of the cumulative damage done to the American-Israeli relationship. He said that the relationship should be based on values, not interests. In citing this, he reflected on the founders of both countries seeking to create utopian societies based on liberty.

As if to demonstrate the falling sympathy for Israel amongst Democrats, it was reported that a group of Democrats had pressured the party to remove $1 billion for Israel’s Iron Dome from the bill to keep the US Government funded. They threatened to vote against the bill if the Iron Dome funding was included, according to the AJN.

However, by the end of the week a bill was passed with the support of both Republicans and Democrats to fully fund the Iron Dome, which has given Israel protection from rocket fire from Hamas. Congress members expressed the view that they had an obligation to stand by their historical ally. Others accused the perpetrators as being antisemitic.

The AJN has also reported “a shift in tone from the White House on the Abraham Accords”, which appears to be very much in keeping with Lapid’s view that the relationship should be based on values in support of building societies based on liberty.

It was noted that previously the Biden team had been hesitant to bring religion into any diplomatic brokering. However, at the first anniversary of the Abraham Accords between Israel and four Arab States, the US Jewish Secretary of State Antony Blinken, gave recognition to “Abraham, in our Bible (who) had the temerity to engage G-d……to ask why and why not?”.

He went on to say “I think each of you and each of our countries asked, ‘Why not?’. And the answer we now see before us with the accords – is the manifest benefits that it’s bringing to people, not just in the countries concerned, but I think increasingly more broadly”.