Previous Next
Support Equality at the Kotel 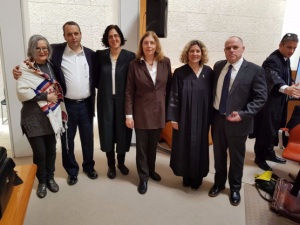 “The Reform and Conservative movements must not be allowed to gain a foothold…those who are not far from abominations, unholy, and unkosher – them – throw them to the dogs, and Women of the Wall – this group placed at the edge of the camp, next to the Dung Gate, in a far-off corner, that is their place, throw them to the dogs.”
This quote from ultra-Orthodox MK Meir Porush, using biblical terminology to show how little they value progressive Judaism, is how Orly Erez-Likhovski, director of our legal department, began in front of the Supreme Court at our hearing about the Kotel yesterday morning, showing the judges an example of what we are up against.
Yesterday morning, an expanded panel of seven Supreme Court judges heard our case for equality at the Western Wall. They spent a long time on this issue – in our history, we have never witnessed such a long hearing.
During the hearing, we showed them videos of the harassment of participants at monthly Women of the Wall prayers, and of the guards being violent towards people carrying Torah scrolls. The judges showed deep concern, and Chief Justice Hayut questioned why we are not allowed to use the Torah scrolls on site. She was answered, matter-of-factly, that all of the Torah scrolls are in the men’s section. The judges also asked about the fences built around the wall to hide the Robinson’s Arch area, and requested more written material from the government.
We received the preliminary court decision today requesting more information from the State, and giving them three months to supply concrete plans for the Kotel renovations. It is going to take the court months, at the very least, to come to a decision. During that time, we will continue to fight. We will fight for equality at the Western Wall – publicly and legally – until we get the equality we deserve.
Support us in our continued fight for equality at the Western Wall.