Judaism for all – “Free market Judaism”

Previous Next
Judaism for all – “Free market Judaism”

A few years ago, Rabbi Ovadia Yosef (pictured), the spiritual leader of Shas, called a surprise “emergency rally” at a wedding hall in Jerusalem. Hundreds 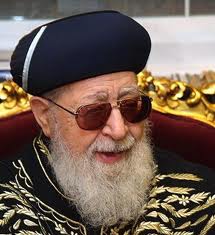 of Shas MKs and functionaries, high-ranking administrators of the Shas Ma’ayan Hachinuch Hatorani school system, rabbis and rabbinic judges and representatives from the news media received word that the rally was slated to take place within a few hours. After hasty preparations, hundreds converged on the wedding hall, not far from Yosef’s home in the Har Nof neighborhood. A packed crowd waited expectantly as Yosef took the stage. No-one knew the reason for the rally.

Yosef launched into a long speech of contrition about how he, as a preeminent spiritual leader and interpreter of Jewish law, was to be held personally responsible for every Jew in Israel who could have been brought closer to Judaism but was not because of something that he said or did or did not say or did not do. At one point, Yosef began to cry.

Unfortunately, none of that self-critical introspection was apparent Tuesday at an emergency meeting called by Chief Sephardi Rabbi Shlomo Amar. Instead, the increasingly dominant haredi wing of the Chief Rabbinate of Israel convened – not to think of innovative ways to reach out to tens of thousands of Israelis who would like to learn more about their Jewish tradition but never had the opportunity – but to gather together to bash fellow Jews.

Amar referred to non-Orthodox Jews as “destroyers” of Judaism.

“They fight against every holy thing,” declared Amar, “they are trying to uproot Judaism… We must pray [against them] like in times of war when bullets and missiles are being shot at us.”

What got Amar, Kook and the others all riled up? Last month, Attorney-General Yehuda Weinstein announced – following a Supreme Court petition filed back in 2005 by the Israeli Reform Movement’s legal arm – that the state would recognize Reform and Masorti (Conservative) rabbis as “non-Orthodox community rabbis” and would provide a small number of these rabbis with state-funded salaries, just like their Orthodox counterparts.

Tuesday’s rally was yet additional proof of what has become abundantly clear: The Chief Rabbinate has become an institution that does more harm then good to the way Judaism is perceived by the wider public.

Unlike Chabad and a few other Orthodox organizations – not to mention Reform and Conservative streams – that have set a goal to reach out to every single Jews regardless of his or her beliefs and practices, the Chief Rabbinate, originally created to provide religious services to all Israeli Jews, has become increasingly close-minded, parochial and intolerant. Its rabbis seem more preoccupied – obsessed? – with defending their monopoly over state funds for religious services from privately funded organizations such as the Orthodox Tzohar rabbis and the Reform and Masorti (Conservative) rabbis than doing their job.

Therefore, the solution is simple. The state must stop providing all those distracting state funds.

What’s more, the present system suffers from all the built-in ills that afflict many state-run endeavors: mind-numbing bureaucracy; advancement based on seniority, not meritocracy; and a total lack of a service ethos. When the services being provided are welfare payments, automobile licensing or passport renewal, expectation levels are low and so is the potential for disappointment. But when the state bureaucracy, with all its fundamental disadvantages, starts meddling in the highly charged and emotional matters of religion, a crisis of faith can result.

Instead, a type of “free market Judaism” should be introduced. Vying religious organizations – Orthodox, Conservative and Reform –should compete among each other on a level playing field to provide the very best religious services. Citizens will have the freedom to choose from among those services on the basis of quality.

“Free market Judaism” would create the conditions – competition, striving for excellence, relevance – for a more robust religious environment. And it would reduce the chances of Yosef calling another emergency rally to express public remorse for not doing enough to bring Jews closer to their roots.