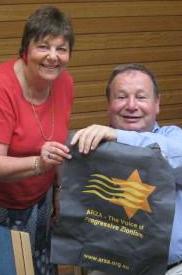 Leibovic (pictured left with ARZA chair Barbara Ford), who holds the JNF-KKL Lands Portfolio, told the lunch attendees that he is uniquely placed as a member of the Progressive Judaism movement in Israel in a position of high political influence. His appointment at the last World Zionist Congress in 2010 was as a direct result of the high number of ARZENU delegates, which is calculated on the number of voting members from each country.

Therefore, it is vital for the future of Israel that every Progressive Jew becomes a member of ARZA so they can vote.

“The most effective way of ensuring that Progressive Jewish issues and values are incorporated into Israeli society is to activate your ARZA membership today,” Leibovic stressed.

Previously Leibovic was responsible for the JNF-KKL Education Portfolio. He served as Director-General of the Israel Movement for Progressive Judaism, and as Director-General of the World Union for Progressive Judaism in Israel and in the FSU. His wife Rabbi Maya Leibovitch is the first Israeli-born woman to be ordained as a rabbi, and currently serves at Kehilat Mevesseret Zion and is head of the Israel Moetzah.

NOTE: A special gift from ARZA was recently posted to UPJ members, which has details about how to join ARZA.