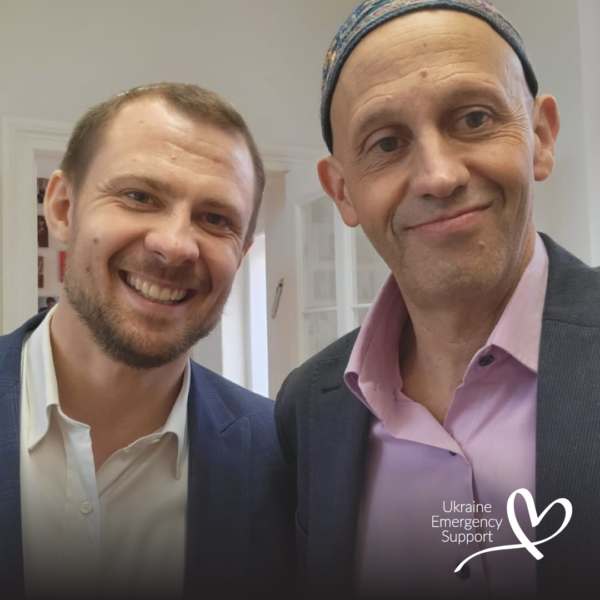 My last message to you was about the Olim and refugees who have fled Ukraine to Israel. I talked about the amazing work being done by the World Union for Progressive Judaism (WUPJ) in partnership with the Israel Movement for Progressive Judaism (IMPJ), working together to bring immediate assistance on the ground in Israel to those who have arrived from Ukraine prior to Pesach. I asked for your continued support to ensure spiritual solace with Passover Seders could be brought to those who have had to flee their homeland.

Rabbi Bergman’s visit to Europe tells us firsthand about the response of the Progressive communities in Germany, Poland, and the Czech Republic to the Ukraine refugee crisis.

Rabbi Bergman reported that he visited several Jewish welcome centres, particularly in Germany with Progressive Jewish leaders Sonja Guentner, chair of the European Union for Progressive Judaism and Irith Michelsohn, General Secretary of the Progressive Juden in Deutschland. At these centres refugees receive food, clothing, and social services, connecting them to the German state support system.

He also reported meeting student Rabbi Alex Kovtun who he says is doing incredible work travelling across Germany delivering food, translating, and offering help to thousands of Ukrainian refugees. Rabbi Kovtun apparently spends hours on railway platforms greeting refugees with water and helping translate what train workers are telling him and helping refugees to determine how to continue their journey.

Rabbi Bergman is quoted as saying “Student Rabbi Kovtun’s work is inspiring and a model for us all. The WUPJ is proud to support his incredible efforts and those of many Progressive Jews and communities across Germany”.

The WUPJ supports all refugees with a Jewish identity wherever they choose to live and have a good future. Countries like Germany are welcoming refugees and helping them settle, making sure there is the infrastructure available to help with education, language, and religious support.

Finally, the Progressive Movement is working with the Jewish Agency and the IMPJ to give refugees the option of making Aliyah to Israel.

It is believed that over 4 million Ukrainians have fled their homeland. With the Russian attack on Donbas under way, there will no doubt be many more fleeing the terror perpetrated on a people seeking to protect their freedom and democracy.

Your continued support for the UIA Progressive Appeal is needed now more than ever.