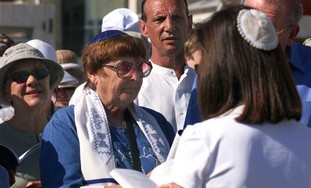 Leading national-religious personality Rabbi Yuval Cherlow has called for state recognition of non-Orthodox Jewish denominations as a means of preventing their alienation from the Jewish state. (Photo: Progressive Jews during a service in Jerusalem)

Cherlow added, however, that this recognition should be political in nature and not on the basis of Jewish law.

Cherlow, the dean of the Hesder Yeshiva of Petah Tikva, made his comments in a letter addressed to his students following his return from a visit to the US last week in which he spelled out his concern for the ongoing assimilation of Jews outside Israel and what he described as a decreasing sense of Jewish identity in the Diaspora.

Cherlow is known as one of the modern national-religious leaders and has expressed relatively liberal opinions on a number of crucial issues within the Orthodox Jewish world.

“World Jewry, principally in the US, continues to assimilate and is disappearing from the Jewish people,” wrote Cherlow.

According to the rabbi, one reason for growing alienation of world Jewry from Israel is that the state does not recognize non-Orthodox streams “and the fact that they are not wanted here… and they don’t want to identify with a state that has a religious monopoly.”

Cherlow added that the perception of the Chief Rabbinate “adds fuel to the fire,” in this regard.

The Chief Rabbinate, and Sephardi Chief Rabbi Shlomo Amar in particular, bitterly denounced the decision as threatening the future of the Jewish people, with Amar accusing non-Orthodox rabbis of “poisoning the well of holiness and taking people to the nethermost pit.”

Cherlow wrote in his letter that one possible method to prevent Diaspora communities’ loss of Jewish identity and identification with Israel would be for the state to recognize the different non-Orthodox denominations through “a differentiation between the position of Jewish law and the policies of the State of Israel.

“The correctness of the state (not Halacha!) Recognizing the different denominations, their conversions, and similar, or at the very least with state budget proportional to the size of their communities,” he wrote.

Within this framework, Cherlow continued, the “struggle against them could be conducted in the atmosphere of the ‘free market.’”