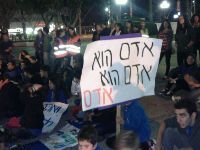 In a show of solidarity against the unknown vandals who painted graffiti on the building that houses the Israel Movement for Progressive Judaism’s Kehillat Ra’anan, hundreds of secular, Reform, Conservative and even Orthodox youth from the city held a protest rally entitled “Hatred of ideas? Not in our society! We will not be silent!” The rally was organised by the youth themselves and the protesters called for a zero tolerance for such violence with signs saying things like “A person is a person is a person”.