Female MKs pray with Women of the Wall

Previous Next
Female MKs pray with Women of the Wall 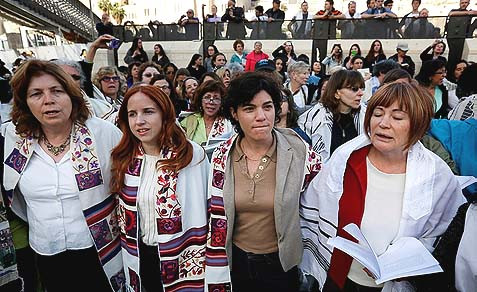 MKs Stav Shafir (Labor), Tamar Zandberg (Meretz) and Michal Rozin (Meretz) participated on March 12 in the Women of the Wall Rosh Chodesh prayers at the Kotel (Pictured, from left: Anat Hoffman, MK Stav Shaffir, MK Tamar Zandberg, and Leslie Sachs). All three, like the rest of the 300 women present, donned prayer shawls, in violation of a 2003 Supreme Court’s ruling – and some 30 per cent of the women were Israeli Modern Orthodox. This time, however, due to the presence of three legislators, police refrained from arresting anyone. The group noted that this was the first time in 22 months in which none of them ended up in jail.

The Kotel Police did try at first to prevent MK Shafir from entering the plaza, but she insisted on her right to participate in prayer and on wearing a prayer shawl.

This incident was very similar to the attempt, one week ago, of MK Moshe Feiglin to enter the Dome of the Rock, armed with his own MK papers.

Perhaps it is high time that the two groups, the Temple Mount Loyalists and the Women of the Wall combine their efforts…

After the prayer service, MK Shafir said: “They tried to prevent us from entering the Western Wall plaza, claiming we are disturbing the public order, but there is nothing that 100 women armed with tallitot can’t do. Surrounded by male and female police, against the shouting and shofar blowing of Haredi men across the fence – we stood in front of the Kotel and said our prayer.”

If a future prime minister would be looking for a new Minister of Religious Services, perhaps MK Shafir, leader of the social protests of the summer of 2011, would find her true calling there.

“I normally do not wear a tallit, but I feel a duty and a great privilege to stand here and make sure that every Jew in the world can pray as they wish,” MK Shafir stated. “I cannot be that one faction of Judaism take possession of a place which is sacred to all the Jew of the world. While there are genuine disagreements between the different streams of Judaism over the correct way to worship God, we must remember that there’s more uniting than dividing us, and the least we can do is let everyone, male and female, pray to God as they best understand.”

Women of the Wall Chair Anat Hoffman said, with more than a little melodramatic flair: “Today we took one more step in our struggle to liberate the Kotel. Thanks to the members of Knesset, we prayed today with tallit and tefillin, an act which for the last 22 months has carried with it the threat of arrest. We must keep up the pressure to end the oppression of women at the Kotel, to see a day soon when we read Torah in peace at the Kotel.”

Shira Pruce, the organization’s director of public relations, was a bit more prosaic in describing the day’s event, although she, too, sounded elated. Speaking to the Jewish Press, Pruce insisted that the Women of the Wall’s end goal is not to create a new Jewish movement, or promote any particular stream of Judaism.

“There were a lot more Israeli Orthodox women than usual,” she said, referring to the attendance at the Rosh Chodesh ceremony. “Maybe up to 30 percent. I was really surprised. I think in the last few months we’ve started attracting Modern Orthodox women.”

The majority of women, though, were Conservative and Reform.

There were more than the usual number of Haredi women on hand this time, whom, Spruce thought, were there in response to the group’s presence.

“They were screaming and yelling and insulting,” she described, suggesting “there was no doubt” that they came just to disturb the group’s prayer.

On Monday, Women of the Wall announced its concern after Haredi Jerusalem had been plastered with “pashkevilim” calling on Haredim to come in droves to protest the Kotel prayers. But, according to Pruce, “the pashkevilim did not have the desired effect. Maybe we don’t bother the average Haredi person as much as one might think or the government might fear.”

And that’s an expression of hope if I ever heard one.