Previous Next
Stopping the Slippery Slope

The work of ARZA and its global organisation, ARZENU, has become even more important in trying to maintain Israel as an inclusive and democratic State as Israel’s Government moves increasingly to the Right, allows the Ultra-Orthodox groups ever-increasing resources and power, and increasingly puts the concept of a “Jewish” state before the protection of the State as a democracy.

Without calling the Nation State Law a step towards apartheid it is clear that the passing of such a law raises the spectre of “nationalism” replacing the national identity of all citizens. The main difficulty with the Law is the focus on the State as the “national home of the Jewish people, in which it fulfils its natural, cultural, religious and historical right to self-determination.” However, unlike the Declaration of Independence, this Law at deliberately omits offering any similar rights to other groups regarding the equality of all citizens, and without referring to the democratic nature of the State. This raises the concern that the Law’s emphasis on the national identity of the State comes at the expense of its non-Jewish citizens. 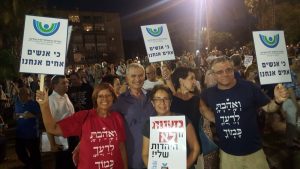 The fact that this Law was passed only after long and robust debate proves that Israel is still very much a democracy.  However, when a Law that clearly states that some citizens are “more equal than the others” is coupled with another very worrying trend, which is to call those who criticise anything the Government or the IDF does as “traitors” and “enemies of the State” there must be cause for concern.

Unlike the majority of the Australian Jewish community, which tends to place unceasing support for Israel before concerns about these trends, many members of the Progressive community, along with many, many Jews around the world fear that unless this slide is stopped not only will the nature of the Jewish State change, but it will result in a significant divide between Israel and the Jews in the Diaspora.

A number of years ago the Progressive movement made a conscious decision not to create a political party to run for Knesset places, believing that there should indeed be a separation between “Church & State” and religion should be outside of the political arena. 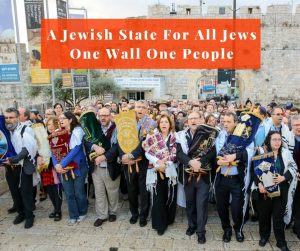 As such, the place where world Jewry has influence is in the World Zionist Congress (WZC). Over recent years in particular, when ARZENU has been part of the strongest group in the Congress we have pushed through numerous resolutions that have increased transparency and equality throughout Israeli society.

We have also prevented many attempts to funnel increasing amounts of financial aid to go to Settlements beyond the Green Line.  It was also, undoubtedly, the influence of our group that persuaded the Chairman of the Jewish Agency, Natan Sharansky, to accept and valiantly fight for an egalitarian prayer space at the Kotel.

For every person who agrees with the above slogan “A Jewish State for all Jews – One Wall for one People” the need to support ARZA by becoming a member is an essential part of their Jewish identity and life.