Ultra-Orthodox clash with Women of the Wall at holy site 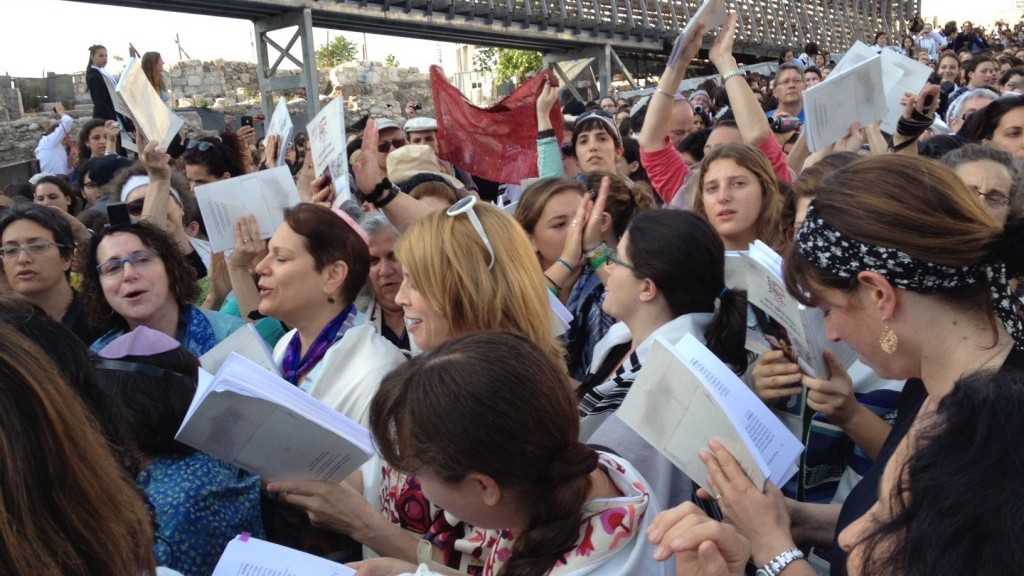 Three men were arrested and two policemen injured as thousands of Haredis flock to Western Wall in failed bid to keep group from holding prayer session.

Clashes erupted at Jerusalem’s Western Wall plaza early Friday morning, as thousands of ultra-Orthodox teenagers attempted to prevent the Women of the Wall from holding their monthly egalitarian prayer session at the site.

Three Haredi men were arrested on suspicion of disturbing the peace, reported Israel Radio, but police largely kept the area under control, at times wrestling individual Haredi male protesters to the ground. Two police officers were injured lightly and treated on the spot.

Uniformed police formed a barricade in the plaza to keep masses of white-and-black clad ultra-Orthodox men and boys from advancing on the liberal women’s group — whose members were praying on an elevated platform away from the Wall itself. Haredi teenaged boys threw small rocks and bottles of water, as well as other random items like candy, at the gathered women.

When the Women of the Wall’s services ended, police escorted its several hundred members and supporters to city buses that were stationed just outside the plaza. Haredi teenagers continued throwing small rocks at the group as it was being ushered out of the area, and at the buses on their way out of Jerusalem’s Old City.

Police said more arrests may be forthcoming, after law enforcement officials get a chance to review footage and pictures from the incident, which lasted for over two hours.

Male and female ultra-Orthodox teenagers from around the country attended the protest, which came on the heels of a court decision that allowed the women’s group to continue to pray at Judaism’s holiest site unimpeded.

“They’re doing this to provoke us, and it’s an insult to Judaism,” said one Haredi protester.

The Women of the Wall, who gather monthly to celebrate Rosh Hodesh (the new moon) in the women’s section of the Western Wall plaza, pray with tefillin (phylacteries), prayer shawls and Torah scrolls, religious items traditionally used only by men. Friday morning marked the beginning of the new Jewish month of Sivan. The group says its actions are not in contravention of halacha (Jewish law).

Border Police barricade part of the Western Wall plaza Friday morning as Women of the Wall make their way to the Jewish site to hold prayers on the first of the month of Sivan.

Freshman Knesset members Tamar Zandberg and Michal Rozin, both of the left-wing Meretz party, were in attendance, supporting the Women of the Wall. Likud MK Miri Regev, famous for her anti-African migrant positions, was on the scene supporting the Haredi protesters.

“We must respect all strains of religion in Israel,” Regev told reporters, “but we must maintain traditional norms at the Western Wall.”

Many secular women and girls gathered alongside WOW’s worshippers in what some said was a show of support for religious pluralism.

The Chairman of The Jewish Agency for Israel, Natan Sharansky, who recently introduced a plan for an egalitarian prayer space at the Western Wall, said the events of Friday morning dramatically reinforce the urgent need for a sustainable solution which will allow any Jew, group of Jews or Jewish community to pray at the Western Wall according to their own custom.

Sharansky also praised police for their level-headed action in the very difficult circumstances, dealing with the rioters while helping ensure that those engaged in prayer could do so.

Police have occasionally arrested members of WOW for their activities, saying they violate a 2003 Supreme Court decision barring them from wearing prayer shawls and reading from the Torah, because those actions deviate from the Orthodox “tradition of the site,” upset other worshipers and cause disturbances.

An April 25 decision by Judge Moshe Sobel of the Jerusalem District Court, which ruled that the Supreme Court decision didn’t warrant arrests of Women of the Wall activists, was a significant victory for the group and a defeat for the state prosecution and police, who arrested five of the women on April 11 and charged them with disturbing the peace.

Leah Aharoni, a resident of the West Bank settlement Kochav Yaakov who helped organize the demonstration, told Kikar Shabbat that the plan to hold a mass prayer arose “because there are multitudes of religious and ultra-Orthodox women that believe the total opposite of the Women of the Wall and their voice isn’t heard.”

On Thursday, the rabbi of the Western Wall, Shmuel Rabinowitz, called for calm and Jewish unity.

“The Western Wall is the one uniting place we have left,” Rabinowitz said in a statement.

Rabinowitz warned against “extremists” hurting the wall — language he has previously used to criticize Women of the Wall.

“I beseech you, the silent majority, for whom the Western Wall is close to your heart, to stop extremists from all sides from changing the wall into a ground where brothers fight,” he said.

By Michal Shmulovich and Yoel Goldman