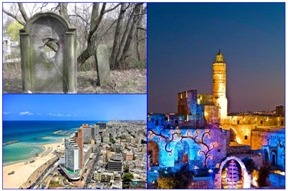 Read the blog written by members of the 2014 UPJ Mission to Poland and Israel. 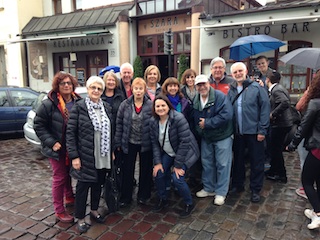 Today the group started to get an impression of Jewish life in Krakow. We walked through the cobbled squares and streets of Kazimerz, the Jewish quarter. We saw the Old Synagogue built in the 15th century which is preserved as a museum; the restored Tempel Synagogue, beautifully ornate inside, -a progressive synagogue from the 1870’s and the small Rema synagogue beside the Jewish cemetery. The cemetery was desecrated by the Nazis and it was very moving to see a memorial wall made from fragments of gravestones.

It was clear that for centuries Jewish life in Krakow was rich, connected to other centres such as Prague and part of the fabric of Krakow.

The group saw a photographic exhibition at the Galicia museum. This museum strives to educate and preserve the Jewish heritage of Polish Galicia. It contains a photographic exhibition called Traces of Memory, that shows major sites such as Belzec death camp, as well as isolated places such as a field where 67 Jews were murdered or a forest where a memorial has been erected on the site of Jewish graves.

After a lunch at “Hummus and Happiness” we went to Schindler’s Factory. This is a museum about life in Krakow under Nazi occupation, that includes the story of the fate of the 68,000 Jews that were in Krakow before World War 11. At the end of the exhibition are Schindler’s office and reception rooms as well as pictures of some of the people saved by Schindler, including some who were known to members of the group.

Not far from Schindler’s factory was the wall of the ghetto. It was chilling to see the section of the wall that survives. It looks like a series of tombstones. The last stop of the day was at the Square of the Ghetto Martyrs which was inside the ghetto. On one corner was the pharmacy where a righteous Pole Tadeusz Pankiewicz provided medications and a place of safety for the ghetto inhabitants. 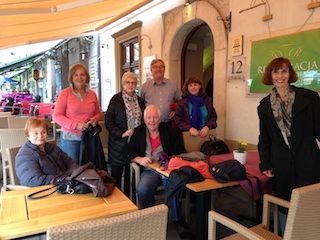 At the end of the day Rabbi Burnstein reminded that we are commanded many times in Torah to remember. He also suggested that we reflect on Kedoshim, holiness. He said that it is impossible to know how we might behave when faced by the extreme conditions that the Jews of Krakow suffered. However he said that what we can do is to perform small acts of kindness towards our other people. In this way we are also fulfilling another important mitzvah which is to choose life.

Our second day was one of reflection when we went to the first visit of a concentration camp.

We left at 8.00 for the hour journey from Krakow to Auschwitz and Birkenau.

We stopped at the memorial outside and held a simple ANZAC day ceremony Sandy Hollis prepared ending with the last post.

We began the tour of Auschwitz and went through the rooms in self-imposed silence. The mood of the group was one of horror at the reality of the autrocities committed by the Nazis during this period.

Some of us walked to Birkenau stopping and reflecting on what we had seen.

We stopped at the train stop for the Junger run and looked into the distance at the menacing tower of Birkenau.

Walking through the entrance sent a chill through me as I looked at the reality of the extent and huge size of the camp. It was cold and overcast which reflected the way we all felt.

We spent four hours wandering the camp seeing the way the camp was organized and feeling for all the inhabitants.

We lit candles which ARZA had given us and said yorzheit with our hearts and were pleased to leave the oppressive environment.

This evening we will renew ourselves at a shared Shabbat service with the local community.

What an amazing experience this has been. Yesterday was spent at Auschwitz-Birkenau. A most somber experience, partly because for the first time, I could actually see the scale of the whole operation. We walk from 10 in the morning until 4pm, and still couldn’t cover the whole area. In Birkenau alone, there were 90,000 inhabitants and the vast majority of people arriving at the camp never became prisoners because they were sent immediately to the gas chambers.

From the sadness of that day, we went straight into a Shabbat service held at a restaurant belonging to a Polish Reform Jew joined by five members of the reform community. Led by the guitar toting Rabbi who is accompanying us – a young American based in Israel with a great personality – whole thing very casual, ending with dinner and a sing along of Bob Dylan and Leonard Cohen music.

This morning, we went to the Tempel Synagogue which is not a working shul but is kept open for tourists. We were the only ones there so started an abbreviated service and gradually were joined by more and more people wandering in and joining in. I felt very emotional about being with Jews from every part of the world and being able to share Shabbat. There is a saying “more than the Jews have kept Shabbat, Shabbat has kept the Jews” and this was never more evident than this morning!

After an early start we left Rzezow to travel to Lublin. 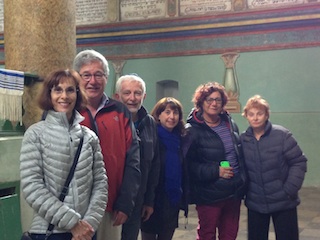 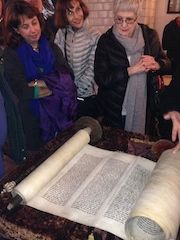 remains of an old synagogue guarded by a remarkable man who talked to us in self taught Hebrew about the community that used to live there and the artifacts which have been collected for the place. The synagogue had been burnt but has been restored as a monument to its former congregation. 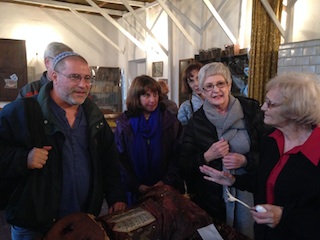 We then travelled to Belzac extermination camp memorial, which was one of the traumatic sights to greet us. Over 500,000 people were exterminated at this camp in a very few months. The were no names recorded at this camp so as tribute common first names have been inscribed at the memorial. Very few records were found but an ex-railway worker painted the scene of the camp giving some insight into the camp layout. We travelled to Lublin were we met representatives from the very small community and we shared cup of tea and looked at the religious objects saved. It was so refreshing to see and experience the sense of renewal in a city which had be devastated of it’s community by 95% . Dinner tonight was at a Jewish restaurant where we shared the most wonderful dinner in the old city.

We left our hotel in Lublin and proceeded to a cemetery dating back to the 15th century. It is a little neglected but contains the graves of many sages.

From there, we proceeded to the Yeshiva established in the 1930’s by Rabbi Meir Shapiro with monies raised in the U S A and Europe. A magnificent building which now has been converted to a hotel.

Unfortunately this Rabbi passed away at the age of 42 in 1936 and over 30000 people attended his funeral including Polish dignitaries and army personnel. The Rabbis had to give dispensation to allow the funeral to take place a few days after his death to allow those wishing to attend to attend. 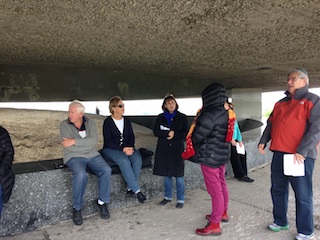 Our next stop was Majdanek which is on the edge of Lublin. It is the shear size of this place and the way the camp was set up which really hits home. We walked for over an hour inspecting the barracks which was very depressing.

At the end of the walk we arrived at a circular memorial which contained the ashes of some of the murdered. A group of Israeli children from settlements adjacent to Gaza joined us for a short Yom Hashoah service which was uplifting and emotional.

After this we drove to Kaziermez Dolny for afternoon tea. This is a village on a river and a place where Jewish life was active before the war.

After a two-hour bus trip we arrived at our hotel in Warsaw. 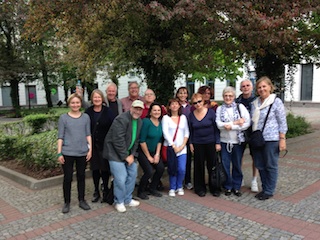 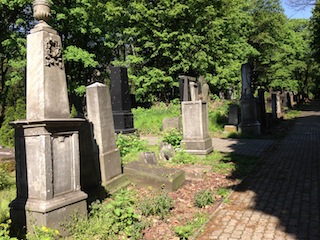 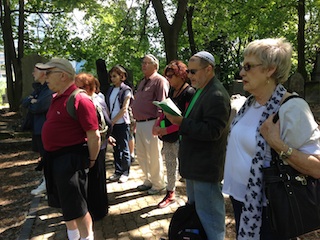 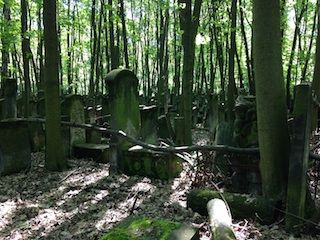 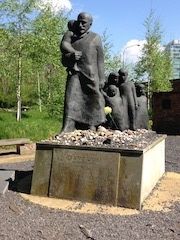 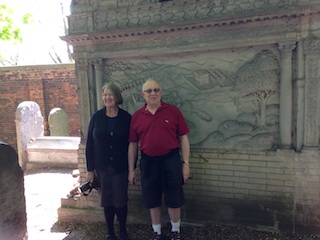