Israeli Reform rabbi keeps a daughter in the family business

Fledgling Rabbi Leora Ezrachi-Vered has big shoes to fill as a female spiritual leader of an Israeli congregation — her mother, Rabbi Naamah Kelman’s
Article from the Times of Israel by RENEE GHERT-ZAND 15 November 2017, 2:06 pm 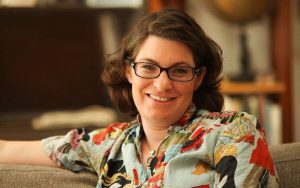 When Leora Ezrachi-Vered attended a Reform Jewish preschool in Jerusalem some 30 years ago, she played blocks with the other children. They built a “synagogue,” and Ezrachi-Vered declared she would be its rabbi.
It was a bold statement: At the time there were no female Reform rabbis in Israel. It was only half a decade later, in 1992, that Ezrachi-Vered’s own mother, Rabbi Naamah Kelman, became the first woman in Israel ordained by the Reform movement.
And now, Ezrachi-Vered’s early childhood declaration has proved prescient. Following in her mother’s pioneering footsteps, Ezrachi-Vered will be ordained on November 16 as the 100th graduate of Hebrew Union College-Jewish Institute of Religion’s rabbinical program in Jerusalem.
“I want to be a religious, spiritual and social leader in Israel, and having the title rabbi joins me to a long tradition of generations of these leaders among the Jewish people,” explained Ezrachi-Vered.
For Ezrachi-Vered, her ordination, alongside David Laor, Rinat Safania-Shwartz, and Yair Tobias, is a moment to celebrate. It is also an opportunity to reflect on how the presence of Reform Judaism and roles of women rabbis in Israel have changed over the last quarter-century. 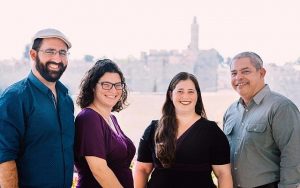 Whereas there were only about eight Reform congregations in Israel when Kelman entered the rabbinate, today there are around 45 active ones, plus a number of relatively new regional rabbis who teach and serve communities all around the country. HUC-JIR alumni have officiated at hundreds of weddings (despite still lacking recognition by the state), bar and bat mitzvahs, and other life cycle events.
Despite this growing impact on Israeli society, Reform Judaism still faces many impediments to making greater inroads. (Surveys indicate that between five and seven percent of Israelis consider themselves either Reform or Conservative Jews.)
Kelman, now dean of The Taube Family Campus, HUC-JIR in Jerusalem, had imagined that 25 years after her ordination the movement would have more synagogues, nurseries and schools throughout the country.
“I guess it was chutzpah or naivite. We really thought we were going to change Israel,” Kelman said. 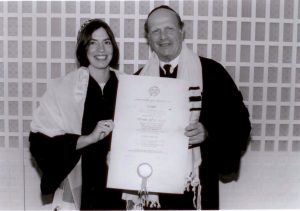 Rabbi Naamah Kelman, Dean of the Taube Family Campus in Jerusalem, made history as the first woman in Israel to become a rabbi. She was ordained by former President Rabbi Alfred Gottschalk, z”l, on July 21, 1992. (Courtesy of HUC-JIR)

In an email interview this week with The Times of Israel, HUC-JIR president Rabbi Aaron Panken enumerated the roadblocks still in place.
“Pluralism and Reform Judaism face many challenges in Israel today: Acceptance by the government of our rabbis, conversions, weddings and funerals; respect for the role of women in Jewish leadership; and the tenuous and difficult relationship between the state and the Diaspora,” he said. 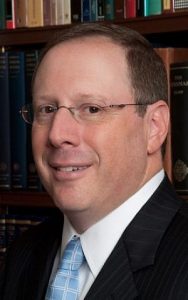 Some days Kelman, 62, feels like the movement has made baby steps, and others, giant ones. She points to not only how Reform has grown, but also how it has paved the way for other feminist and pluralistic Jewish movements, including the ordination of Orthodox women.
“We were the midwives for Orthodox feminism and the Israeli secular renaissance,” Kelman said.
“Leora is Israeli-born, a member of the generation for whom liberal and pluralistic Judaism is natural, a birthright. They speak a Reform Hebrew that we had to create,” Kelman said.
While that may be the case, her daughter added: “But unfortunately, as we have become more accepted among certain pockets of secular, traditional and Modern Orthodox Israelis, the extreme fringe groups have become more violent in trying to spit us out,” Ezrachi-Vered said. 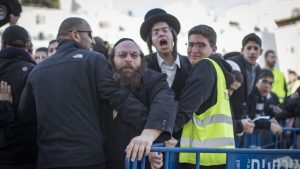 Ultra Orthodox men protest against the Women of the Wall movement as they hold a monthly prayer service at the Western Wall in Jerusalem Old City, February 27, 2017. (Hadas Parush/Flash90) 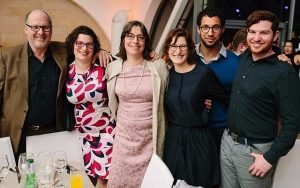 “With all of these numbers lining up, I can only think of it as bashert,” said Ezrachi-Vered, using the Yiddish term for predestined.
Indeed, Ezrachi-Vered was a likely candidate for the rabbinate. She comes from a family of rabbis going back generations, among them her grandfather Rabbi Wolfe Kelman, who was executive director of the Conservative movement’s Rabbinical Assembly and helped professionalize the American rabbinate and pave the way for the ordination of women.
“I like to say that biology is destiny. The rabbinate is our family business. We didn’t pressure any of our kids to be rabbis, but it was clear from early on that Leora might be going in this direction,” said Kelman, who is married to Jerusalem-born Jewish educator and consultant Dr. Elan Ezrachi.
Neither of Ezrachi-Vered’s two siblings showed interest in the rabbinate, nor her cousins.
“They were all quick to thank her when she decided to become a rabbi. They were glad to have the pressure off them,” Kelman said.

Ezrachi-Vered, 35, began leading services and reading Torah at Jerusalem’s Kehilat Kol Haneshama (where her uncle Levi Weiman-Kelman was rabbi until his recent retirement) at age 13. She attended Jerusalem TALI schools (secular public schools with Jewish studies enrichment) pioneered by her parents and others, and was extremely active in the Israeli Reform TELEM youth movement.
After completing her IDF service as an officer educating tank commanders and officers in Jewish values and Zionism, Ezrachi-Vered returned to education and youth work in the Reform movement. She also got involved in her local council, interfaith dialogue, and peace activism with organizations like Tag Meir and Women Wage Peace.
Although Ezrachi-Vered never considered anything other than Reform ordination, she said she prioritizes Jewish pluralism before movement. Accordingly, she recently accepted a position as spiritual leader at Kehilat Nigun Halev, an Israeli Jewish Renewal congregation in the Jezreel Valley, where she recently moved with her husband and three young sons. 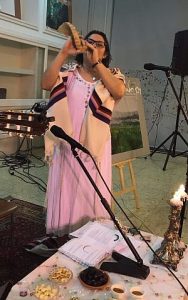 Ezrachi-Vered expects wider acceptance of women rabbis in Israel to be the next frontier.
“It’s the next big step to be achieved. People are becoming used to women rabbis officiating at bar or bat mitzvahs. But around 98 percent of people choosing to marry in Reform wedding ceremonies still want a male rabbi only to officiate,” she said.
Calling Ezrachi-Vered “a talented, qualified, superb Jewish leader,” Panken credited her with being “unafraid of those who are limited and bigoted in their thinking.”
Kelman is obviously biased about her daughter’s abilities. But as an HUC-JIR administrator, she has no qualms saying that her daughter has what it takes to make a fine rabbi.
“Leora has a genuine modesty and humility that allow her to love and touch people in a very deep way,” Kelman said.
Kelman regards the rabbinate as a natural fit for her daughter, and is pleased that her ordination is not by necessity a political statement.
Twenty-five years later, things have changed.
“In fact, I don’t think Leora has a political bone in her body. I had to use my elbows a lot,” Kelman said.