Most Jewish Israelis back equality for Reform movement

Previous Next
Most Jewish Israelis back equality for Reform movement

Nearly two-thirds of Israeli Jews believe that Reform Judaism deserves rights equal to those afforded to Orthodox Judaism, a new poll found.  The Midgam polling agency survey of 500 also showed a 25 percent approval for equality among respondents who defined themselves as religious, the NRG news website reported Thursday. 33% of respondents say they ‘especially identify’ with Progressive Judaism, compared to 36% for Orthodox stream.

Israel’s predominant Jewish denomination is Orthodox. Though some local authorities provide funding and official recognition to other streams of Judaism, activists seeking to achieve greater equality before the law complain of institutional discrimination, connected with the political clout of Orthodox religious parties in Israel and the status of the Orthodox chief rabbinate, which operates state-recognized tribunals and whose hundreds of employees are civil servants.

The NRG report did not say how respondents were selected for the survey, which was commissioned by the Israel Movement for Reform & Progressive Judaism ahead of its 52nd biennial conference on May 27-28.

In the survey, 72% of respondents said they disagreed with the assertions of ultra-Orthodox politicians that Reform Jews are not Jewish at all. Among religious respondents, that figure was 48%.

With approximately 470,000 Jews who define themselves as Reform or Conservative, these denominations, also called Progressive, account for about 7.5% of Israel’s Jewish population, according to several polls. 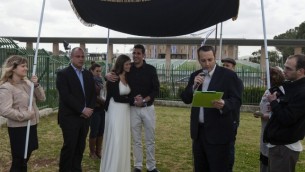 Rabbi Gilad Kariv, the head of the Reform movement in Israel, performs a Reform Jewish wedding ceremony in front of the Knesset, on March 18, 2013. To the left of the couple stands Labor Party MK and secretary-general Hilik Bar. (Flash90)

One in six respondents said they had visited a Reform synagogue over the past five years, and more than 37% said they attended a wedding, bar mitzvah or other religious ceremony under the auspices of the Reform movement. Among Orthodox respondents, that figure was 27.9%.

Asked whether the Israel Defense Forces should have Reform chaplains in addition to Orthodox ones, 47.9% of respondents replied in the affirmative.