An internet link with two of the world’s leading social action activists was one of the highlights of the launch of the Union for Progressive Judaism’s Religious Action & Advocacy Centre (JRAAC) at the King David School in Melbourne. 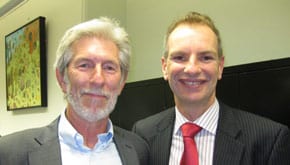 Rabbi David Saperstein,renowned head of  the Religious Action Centre in Washington D.C.and Anat Hoffman, director of the Israel Religious Action Centre addressed the attendees and welcomed JRAAC as the latest partner in the vital mission of Progressive Jews to speak out and act against injustice and prejudice around the world.
“I particularly applaud your decision to include Advocacy in the title and work of your organisation” said Rabbi Saperstein “for how can we call on the world to end discrimination against Jews if we don’t speak out against discrimination taking place against other groups, regardless of their religion, colour, gender or sexual orientation.” Rabbi Saperstein recounted that the RAC was established 50 years ago by the Union for Reform Judaism and is now considered the foremost social action organisation in America. “We are proud of our role representing the Reform Movement, the strongest stream of Judaism in America and around the world. We use Jewish texts and values to speak out on a wide range of issues, from the environment through to marriage equality and racism. ” Rabbi Saperstein was so determined to participate in this historic event that he willingly joined the meeting at 4:30 a.m. Washington time.

Speaking from Jerusalem, Anat Hoffman, told how IRAC had been formed 25 years ago by the World Movement including the URJ in order to ensure that the developing Israeli society fulfilled the promises of the Declaration of Independence in being a democratic and inclusive society with freedom of religion and human rights for all. “Although the miracles of Israel are revealed every day, we are still working toward this goal. However, it is important for you to understand that it is the Progressive Jewish movement that is in the forefront in fighting for these rights for all of Israel’s inhabitants.”
“IRAC has 5 areas of strategic activity” said Anat “and they include working for Religious pluralism and fighting racism and gender segregation in the public sphere of society”. In congratulating the UPJ and ARZA on this initiative she thanked the Australasian Progressive community for their continuing financial and moral support of the Israel Movement for Progressive Judaism, IRAC’s parent organisation “We truly see you as our partners in creating a democratic and inclusive Israel and believe that this new initiative will further that close relationship.”

The meeting was also addressed by Dr. Philip Bliss, Vice Chairman of the World Union for Progressive Judaism and Chair of the WUPJ’s advocacy committee who brought greetings from the world movement “The Centre is following a wonderful tradition established by the WUPJ to advocate for those in need and to speak out even when such statements were not welcomed by all – such as the work carried out in the hostile environment of the United Nations.”

The Centre was officially opened by local M.P. David Southwick who said that the Centre is a wonderful expression of Jewish concern for others and reflected his own commitment in joining politics to try and “make a difference” to the world through commitment and hard work.”
Following the formalities hosted by UPJ President, David Robinson, Steve Denenberg Executive Director of the UPJ said that the Centre has been established directly as a result of the inspirational visits to our region by Rabbi Saperstein and Anat Hoffman, who demonstrated that we have a duty to express the Progressive view on issues and an obligation to try and make our society a better place for all.”

JRAAC has already prepared a number of position papers on topics including Climate Control; Slavery and Asylum Seekers, thanks to the work of researchers Lisa Gelbart and Maddie Davey and these are available from the UPJ.