In the wake of the recent election, Israel may be transcending its decades-old culture war between religious and secular. 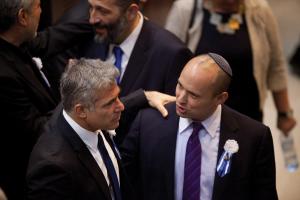 Images from the May 16 demonstration in Jerusalem showed a black sea of anti-Zionist haredi men dressed in traditional suits and head coverings, pouring out their anger against the country’s security forces; they were protesting government policy to pursue plans to draft yeshiva students and cut their public subsidies.

Policemen were pelted with stones by the ultra-Orthodox, and security forces dragged unruly demonstrators through the streets.

At first glance, it was just another day in the standoff between the ultra-Orthodox and Israel’s secular majority (represented by the security forces) — two groups seemingly incapable of bridging the yawning cultural, political and social gaps between them.

But the street battle is actually a sign of a possible tectonic shift that could shake up the so-called status quo that has governed the relationship between religion and state since Israel’s creation.

With the recent success of Yair Lapid’s Yesh Atid (There Is a Future) party and the formation of a government without ultra-Orthodox parties, decades-old conventions like the draft exemptions are being reconsidered, and many hope it will usher an era of stepped-up pluralism in the Jewish state.

Yesh Atid’s surprise second-place showing in Israel’s January election has given it the political clout to spearhead a long-overdue reform effort on the draft and to curtail funding for ultra-Orthodox schools that don’t teach core secular curricula.

The same spirit of reform — born in the social protest movement of 2011 — is being touted by Naftali Bennett, the leader of the Modern Orthodox Jewish Home party. Last week, he promised a “revolution” in the state administration of marriage certification by freeing Israelis to use officiants from anywhere in the country — ostensibly boosting competition between rabbis from various localities.

And Jewish Agency Chairman Natan Sharansky is trying to drive a compromise by building a new area for egalitarian prayer along the Western Wall in Jerusalem to accommodate non-Orthodox Jewish ritual.

The success of Yesh Atid and Bennett is fanning the hope of proponents of religious pluralism in the Jewish state. Yossi Klein Halevi, a fellow at the Shalom Hartman Center in Jerusalem, said Yesh Atid’s parliament members personify a post-modern mixture of Israeli religious life — from ultra-Orthodox to Modern (nationalist) Orthodox, to secular traditionalists. Together, they’re a mash-up of Israel’s normally balkanized Jewish landscape.

“The real significance of Yesh Atid may not be political but cultural,” Halevi said. “Yesh Atid is the first truly religiously pluralistic party in Israel, and it represents that part of Israeli society that wants to live in an Israel that has transcended its religious and culture wars.

“That is the message that is largely overlooked by the focus on Yesh Atid’s political and economic platform,” Halevi continued. “But for the long-term health of Israeli society, Yesh Atid’s cultural makeup is transformative. … The emergence of a religiously pluralistic party reflects a quiet revolution in parts of Israeli society where indigenous forms of non-Orthodox Judaism are being created.”

The election turnaround comes at a propitious moment for Jewish pluralists: for the last decade or so the roots of newfangled Jewish groups have been planted. Halevi mentioned Alma, Tel Aviv’s secular Jewish seminary (see story on page 9), and Beit Tfilah Yisraeli, which has created its own contemporary rituals and liturgy and holds summer Friday-night services in the summer on the deck of the Tel Aviv port.

And so, when a YouTube video of Yesh Atid Knesset member Ruth Calderon, the founder of the Alma secular seminary, giving a Talmud lesson in the Knesset went viral, many saw it as a seminal moment in the drive for religious pluralism; it had now reached the political mainstream and the big stage of the parliament.

“Now, [the idea of religious pluralism] is on a different level,”  said Joel Katz, who edits the blog “Religion and State in Israel.” “We felt a difference because of the Knesset elections. On the ground there definitely is a change.”

An indication of the grass-roots stirrings for alternatives could be found in the social media response to Bennett’s “revolution” declaration on his Facebook page: many of the commentators declared that for a true revolution to take hold Bennett needs to go further and fight for the right of Israelis to be married by a non-Orthodox rabbi or in a civil ceremony.

Still, for all the enthusiasm about the potential for change, the legacy of the deep chasm between secular and Orthodox, Jewish religion and secular state has deep roots in Israeli society and in people’s behavior.

The very idea of adopting a status quo to strike a balance between sects stretches back to the 18th century, when the Ottoman Empire sought to keep the peace between the bickering religious sects in Jerusalem’s Old City. David Ben-Gurion decided to follow a similar course to get ultra-Orthodox communities to tolerate a state with a secular constitution. The price was granting ultra-Orthodox authorities a monopoly on state religious institutions, which alienated many secular Israelis.

While Jewish observance diversified in North America and elsewhere in the diaspora, religious authorities in the Jewish state helped contribute to the stultification of non-Orthodox observance and imagination — giving birth to the famous quip about the synagogues that secular Israelis don’t frequent are Orthodox.

That attitude has persisted, meaning that newfangled pluralist streams still have their work cut out. Many contend that these new streams remain novelties, confined mostly to English-speaking communities in Jerusalem or the Tel Aviv intelligentsia. And they admittedly lack the institutional reach and resources that traditional Judaism enjoys.

Many contend that most secular Israelis still seem unable to break out of the status quo attitude that says that, when it comes to religion in Israel, it’s either traditional institutional Orthodox observance or nothing; and because of the Orthodox monopoly on key life-cycle institutions, such as marriage certification, opening up alternatives has been very difficult.

“People want institutional authorization of their religion,” wrote Tamar Weisengren, a secular Israeli raised in a religious household. “And because there is only recognition of the Orthodox, while other denominations have no legitimacy, there is a sort of segregation — and that deters many people that might want something else.”

At the time of the Jewish holidays, many secular Israelis in search of spirituality often happily accept the welcoming services provided worldwide by the Chabad movement, even though they clash with secular values. For some, the egalitarianism of Reform and Conservative Judaism still seem foreign and inauthentic.

Gender is a “wedge issue” for Israelis when it comes to Jewish ritual, said Dahlia Scheindlin, a public opinion strategist and pollster. “A lot of secular Israelis seem either to be more open to Jewish themes, or have been pushed away because they see it as anti-women,” she said. “And they don’t comprehend there are other streams and options.”

There is, however, thirst for a new way. Tens of thousands of Israelis visit India each year and dabble in Eastern spirituality to fill a vacuum. Once back in Israel, resistance to religion kicks up again due to its politicization. But that might be changing with the new array of political forces in the parliament, and the status quo of old may be giving way to a new reality.