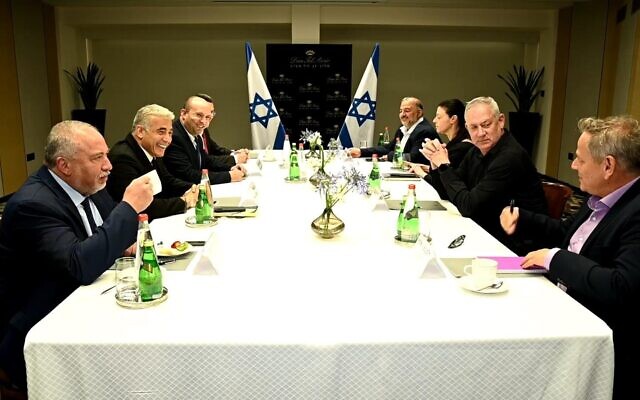 Israelis are “witnessing the biggest election fraud in the history of the country, in my opinion in the history of democracy”. Does this claim bring back memories of a similar claim made by another leader last November? And like on that occasion, I suspect, Netanyahu will provide no evidence to back up such an ill-conceived claim.

In addition, it has been reported that top right wing Israeli rabbis are calling on the public to do “everything” to thwart a Bennett-Lapid Government. A letter signed and issued by six leading religious-Zionist rabbis included an appeal saying “we must make an effort to do everything so this government does not materialize”.

One would have to question what exactly is meant by doing “everything so this government does not materialize”? What do the rabbis have in mind? What do they believe people could do to thwart the formation of a government whose members have been legally elected and have come together to form a Coalition through a legal process conducted by the President of Israel?

Yes, the Coalition that has been formed to replace Netanyahu is “astonishing” in almost every respect. However, Greg Sheridan commented in the Weekend Australian that “the mood in Israeli politics is overwhelmingly that the Netanyahu period should end”.

He believes that it was this, that enabled the formation of a coalition which he describes as representing “an astonishing ideological variety – one might say incoherence – to assemble”. There are three parties whose leaders are said to be to the right of Bibi, (Bennett, Liebermann and Saar) who have been joined by Lapid, a centrist, Labor and Meretz to the left, and for the first time in Israeli political history, the Arab Islamist party Raam has joined this almost unimaginable coalition.

Bennett and Lapid have agreed to rotate the premiership of Israel serving 2 years each, with Bennett taking the first two years. The agreement of this coalition is complex but has built in clauses to stop a repeat of the failure of the previous coalition government under Netanyahu and Gantz. That coalition led to the fourth election in two years when Netanyahu failed to bring down a budget, denying Benny Gantz the chance to be Prime Minister under the agreed rotation.

One can only assume that the posturing of those unprepared to see the end of the Netanyahu era will not amount to anything dramatic.
However, the sad reality in all of this is that Prime Minister Benjamin Netanyahu, until the last couple of years has been an extraordinary leader, the longest serving in the Jewish State. He has seen the State of Israel emerge as a modern economy and a high-tech giant. His record has been described as “one of huge nation-defining achievements” and should not be underrated, despite the many failures.